Harold Katcher’s Yuvan Research is currently running an experiment to see the impact of regular injections of its E5 “elixir” in laboratory rats. Based on updates in newsletters, the Live Forever Club is tracking the result of the experiment as it (or some sort of blood plasma therapy) is one of the leading contenders of a clinical treatment for humans in the near future.

In 2020, Katcher published the results of an experiment in which he injected 2-year-old rats with a plasma fraction (components of blood) from younger rats and monitored its effects. In summary, as well as an average epigenetic age reduction of 54% (across a variety of tissues), the old rats had more youthful levels of over 20 biomarkers and, also, displayed improved physical strength and cognitive ability. More details available in a blog feature at the time - Age Reversal in Mammals – Has This Now Been Achieved?

The only big question not answered in that experiment, was did the improvement is so many biological ageing clocks have a real impact of lifespan? As all of the rats were sacrificed to study their tissues, this was not determined, but that is about to change.

To answer the question of whether average lifespan (i.e. life expectancy) or, even better, maximum lifespan improves as well as the healthspan of the rats, Katcher started a new experiment in February 2021. As before, it began with 24-month-old laboratory rats (female Sprague Dawley rats). The animals receive intravenous E5 every 90 days.

The study will continue until all rats are dead. Once the rats die they are being frozen for future examination including analysis of biomarkers in different organs. According to the May 2022 update, the dead rats showed no obvious symptoms of cause of death.

In longevity experiments the survival curve shows how long the subjects (rats, flies, humans) lived for – ignoring health or any other biomarker data. If we’re going to be able to live significantly longer (or indefinite) lives, then this this where we want to see improvements.

In Katcher’s E5 study, the question is whether the biological age improvements seen in the previous experiment result in actual longer lives – it will be disappointing if the average lifespan doesn’t increase. The excitement will come if maximum lifespan is also increased.

Updates on the experiment are being provided ad hoc, so the survival curve below is a slight approximation as I’m using the newsletter date for date of death (unless otherwise provided), and nor do I know the exact day in February 2021 that the experiment started – but it should give a good indication of how things are going until the final results are published.

Unfortunately, it's starting to look like there won't be a massive increase seen in maximum lifespan. However, it is already possible to note an 8 week increase in life expectancy (when half are still alive) - which is approximately the equivalent 5 human years. That would be a huge result - a greater effect than if cancer (all types) was cured tomorrow.

OK, I take that back! Survival curve has been updated to show that one treated rat, named Sima, has so far survived 44 months which is much longer than typical and possibly the longest-lived Sprague Dawley rat ever reported. 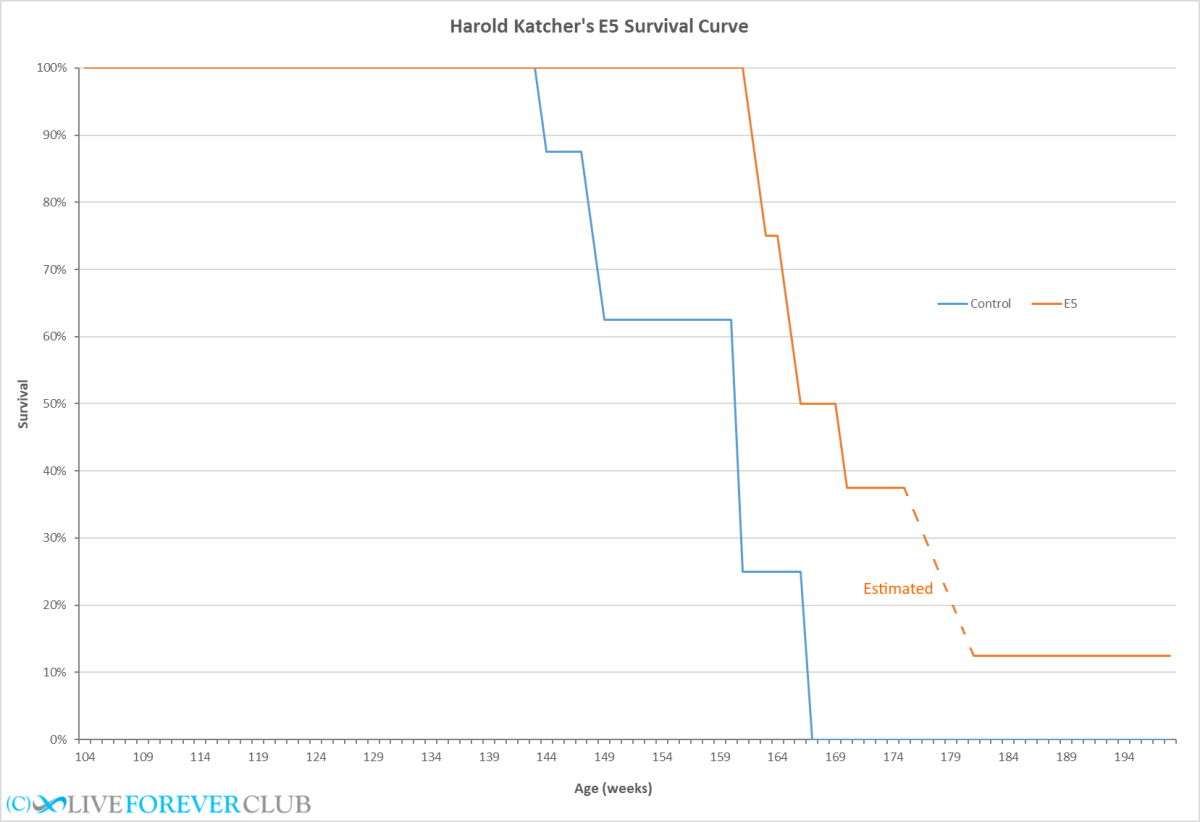 And in case you were wondering, here's what she looks like. The newsletter included a short video in which she looked quite healthy, and apparently her eyesight and motor function are good, and she hasn’t developed skin canker sores or bald patches. 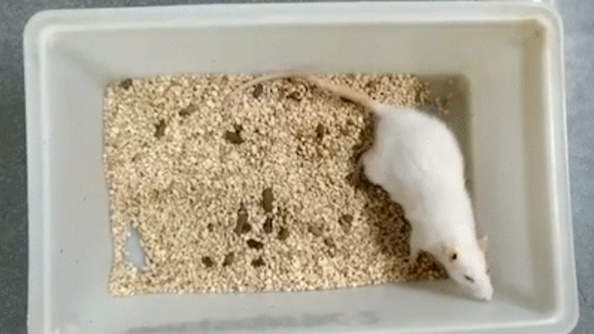 Here is the survival curve of two breeds of popular laboratory rats: 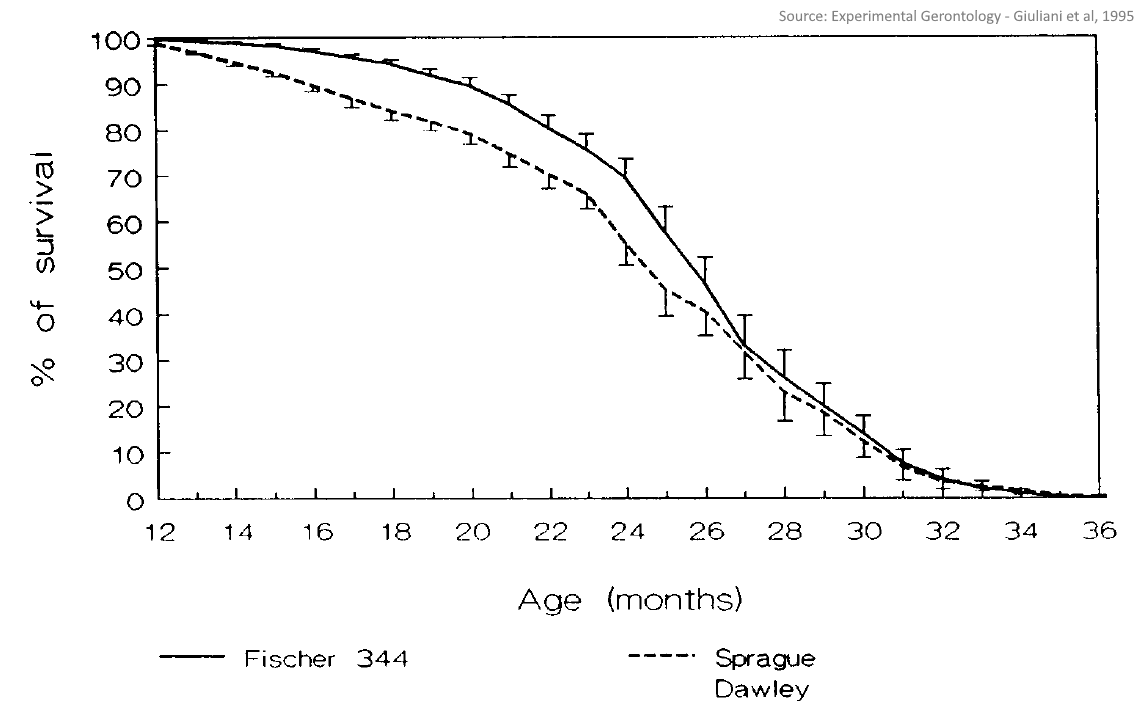 It shows that, typically, rats don’t start to die until they are one year old (up until then, 100% have survived), then there is a steady loss until the deaths increase rapidly at about two years old. This is the same exponential increase of mortality with age as seen in humans and most mammals. A few outliers buck the curve, but there are no survivors beyond around three years – the maximum lifespan of these animals. However, the exact strain of the rats, and their living conditions, will affect the results, and therefore laboratory experiments to use a control group of rats, of the same strain and in the same conditions, to compare against the treated rats.

In many studies, the average lifespan increases which pushes the bulk of the curve to the right, but often the maximum lifespan does not increase so the graph still hits 0% at around the same time. This is not a bad result, as that is often representative of compressed morbidity, that is, a longer period in good health followed by a shorter period of time suffering the consequences of ageing.

Yuvan Research is releasing some biomarker results as the trial progresses, including:

Sometimes they are snapshots (point in time) and sometimes a full history is provided.

During an update video, Dr. Katcher suggested they are seeing 15-20% reduction in age which is less than the effect seen in the original study. He believes this may be because this experiment is using all female rats, whereas the original study used all male rats.

At 38 months, the surviving treated rats had a grip strength (4.3 N) of over double that of the surviving control old rats (11.1 N).

Around late April 2022, Dr. Katcher decided to self-experiment and rubbed some E5 on his right hand. He claims the skin was visibly thicker and lighter, and generally looks decades younger. He has posted a couple of photos of his hands, so decide for yourself... 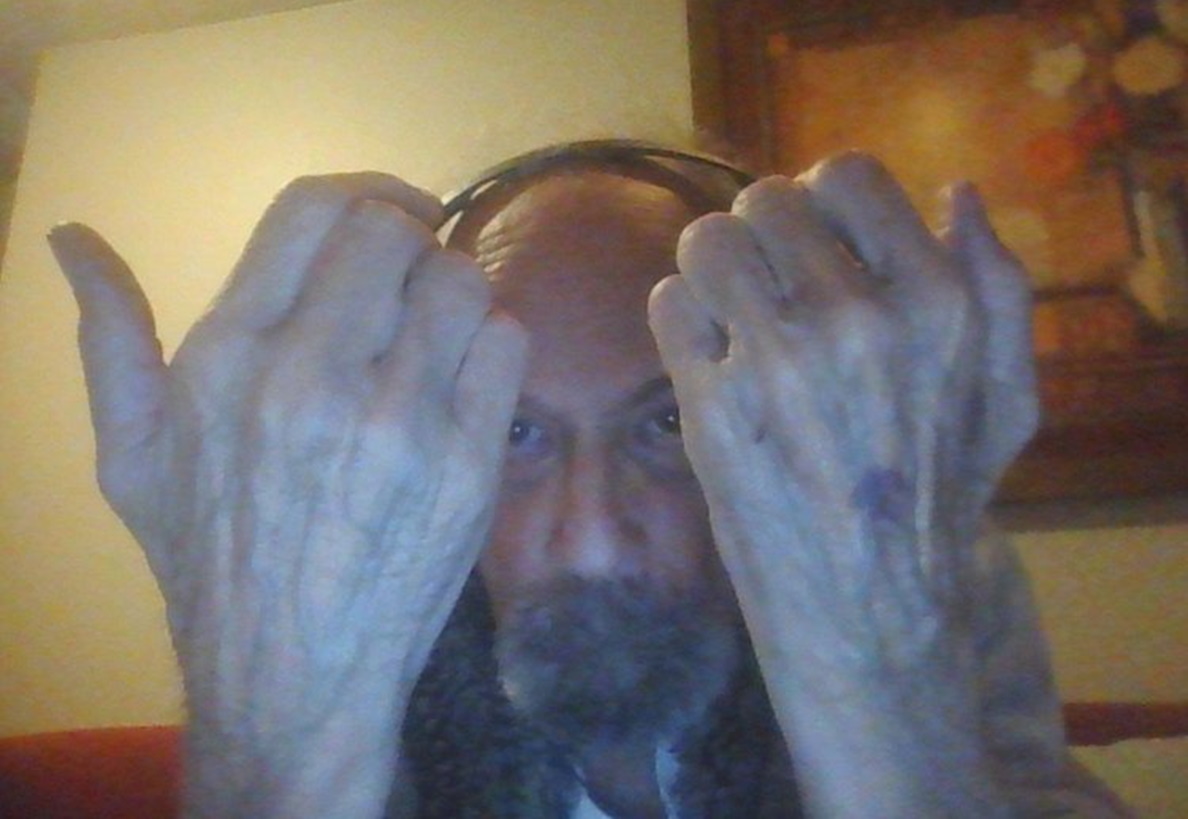 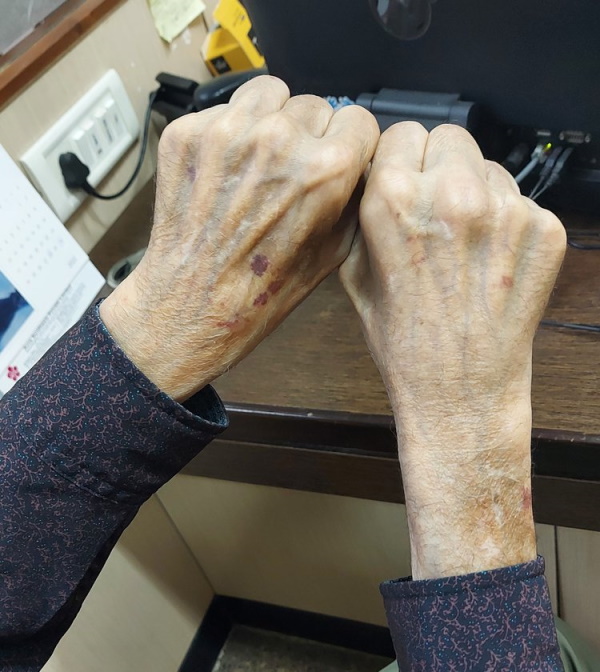 NEEL contains GHK-Cu (copper peptide) which occurs naturally in blood plasma. The human clinical trial of NEEL has recruited 21 volunteers, ranging from 65 to 85 years of age, who apply the gel on their faces for three months - three times a day during the first week, and two times a day for the rest of the study.

Rather than rely on subjective reports of skin improvement, the study is using high resolution ultrasound scanners and other medical imaging equipment to measure the results. So far (November 2022) a mean improvement of 27-30% in collagen levels has been reported.

Here's a high-resolution dermal ultrasound scan of one of the subjects comparing the initial skin to 3 months of Neel gel use. 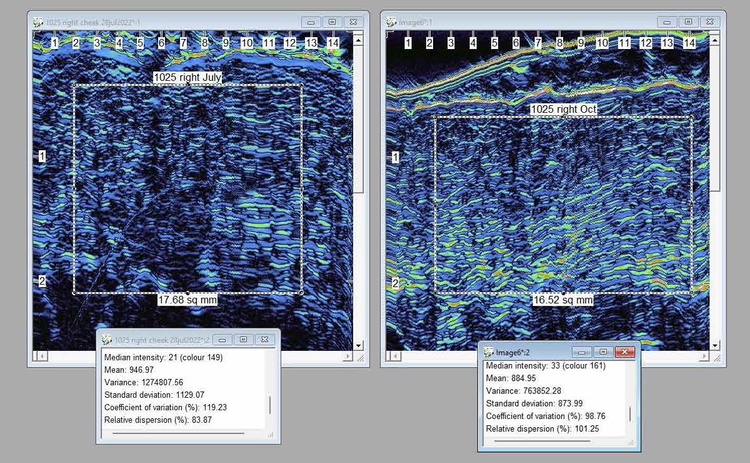 Yuvan Research have announced a couple of follow-on trials.

To see whether the effects of Katcher's self-experiment (see skin photos above) a human trial is planned to start July/August 2022. People of a similar age to him (in their 80s, I assume) will apply E5 to their hands.

If topical use of E5 does not require FDA approval (due to possible exemption under FDA 21 CFR 1271) the company will set up a factory in the USA to manufacture it.

Probably because of the difference in results between the current and original study (the former with male rats, the latter with females), Yuvan has started (early June 2022) another study with 12 rats (6 male, 6 female) in each of the control and treated groups. Treatment will start a bit earlier (18-20 months) than in the current trial (24 months) and the dosing cycle will be reduced from 90 to 45 days.

Within- And Between-Strain Variability In Longevity Of Inbred And Outbred Rats Under The Same Environmental Conditions – Experimental Gerontology - Institute for Research on Senescence - Giuliani et al, 1995

The main text is updated as new information is received, including:

03-May-2022: update on impact of rats' sex, and photo of Katcher's hands after E5 application (from Yuvan Research video)

02-May-2022: update on number of rats surviving (from NTZ newsletter)

Professor at University of Maryland - working on rejuvenation blood factors 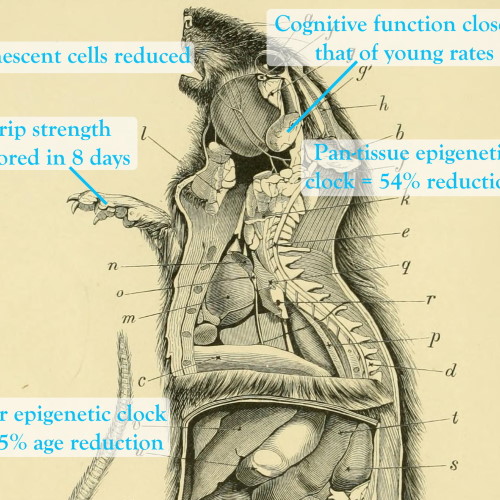