They wanted to determine, based on recent literature, whether ageing can be reversed rather than simply delayed, and do these strategies share common mechanisms of action?

The paper provides an excellent summary table of how and where the different strategies work, what impact they have on life extension, and potential use as human treatments, as well as potential risks involved.

Here is a summary of the research paper “Turning back time with emerging rejuvenation Strategies” published in January 2019 edition of Nature Cell Biology.

Following on from heterochronic parabiosis studies with mice (where a young animal is surgically joined with an older one and their circulatory systems connected), many companies (such as Ambrosia and Alkahest) have dived into the fountain of youth looking at ways of rejuvenating older people with young blood.

Brunet et al found evidence of parabiosis (not a practical human treatment!) revitalising muscle stem cells and improving liver, brain and heart function. The effects appear to be from blood factors (e.g. proteins, exosomes) rather than red or white blood cells. The next question was, is this due to pro-rejuvenation factors in young blood having a positive effect, or a dilution of pro-ageing factors in the old blood?

Examples of pro-ageing factors include eotaxin and β2-microglobulin – both of which increase with age and have been found to degrade cognition and inhibit production of new neurons (neurogenesis).

As for rejuvenation factors, GDF11 is a candidate but has had both positive (improved muscle and neural stem cell functions) and negative (cachexia) results in aged mice.

More encouraging, the metalloproteinase inhibitor TIMP2 decreases with age, resulting in a decline in cognitive function, so this could possibly be reversed by topping up one’s TIMP2 levels.

Unfortunately, although it looks like young blood may be useful in improving healthspan, there has been little evidence to date demonstrating any significant impact on overall lifespan.

Next the team looked at results from dietary interventions, particularly the beneficial effects seen in calorie and carbohydrate restriction, with previous research showing improved function in a variety of tissue types (and the immune system) from short-term dietary restriction.

Where mice were restricted to very low-calorie intake for a few days, twice a month, memory and lifespan improvements were seen as well as a reduction in cancer and inflammatory diseases.

One cause of these beneficial effects may be the boost in the number of stem cells seen when a normal diet is resumed, either due to their increased number or because they have supplanted damaged cells.

Another key factor behind the improvements is likely to be changes to nutrient-sensing pathways (cells’ ability to detect and adapt to available fuel supplies) - particularly mTOR and insulin–IGF signalling. These signals are seen to be inhibited and therefore some researchers are searching for compounds to replicate this effect.

Rapamycin is a known mTOR inhibitor and improves memory and learning, though this occurs at all ages, so it's not clear that improvements in old age are due to rejuvenation or enhancement. Perhaps that distinction would be unimportant to the patient.

Rather than reducing calories, the ketogenic diet reduces the carbohydrate intake but not the overall calories. Like FMD, benefits reported in other studies include improvements to memory and lifespan, and decreased incidence of cancer.

Interestingly, some measures were better post-treatment than before, suggesting that ill-effects were not only delayed but possibly also reversed.

Again like FMD, inhibition of mTOR and insulin–IGF signalling is also observed, though the affect seems to wear off with long-term adherence to a ketogenic diet. A different mechanism observed is an increase in the level of β-hydroxybutyrate, which affects how DNA is wound up inside a chromosome by inhibiting histone deacetylases, and therefore may be another target longevity compound.

Senescent cells have lost their ability to divide – either because they have reached the Hayflick limit of cell divisions (i.e. their telomeres are too short) or due to some other damage that has not triggered apoptosis (self-induced cell death). They have been found in many mammals and current thinking is that this mechanism has been useful as an evolutionary mechanism to suppress cancer by naturally limiting run-away tumour growth.

However, these cells do not continue to function perfectly, and release a variety of factors, many of which are inflammatory, referred to together as the senescence-associated secretory phenotype (SASP). These factors affect nearby cells causing them to malfunction, for example some stem cells cease dividing, and are blamed for several age-related conditions including atherosclerosis and Alzheimer’s disease.

Experiments with mice, where their senescent cells are removed, have resulted in improvements in cardiovascular, bone, and liver functions, as well as revitalised stem cell populations.

Removing some senescent cells (identified by their p16 protein) from middle-aged mice saw a 25% increase in lifespan. That’s the equivalent of starting treatment on a 40-year old human and them living to 100 instead of the average 80 years.

As always, the biology is more complicated than the headlines, so human treatment won’t be available for some time. Before that, we’ll have to have a better understanding of the beneficial effects of senescent cells (e.g. tissue repair) and improve the methods of identification because some non-senescent cells also secrete some of the factors that are used to target the zombie cells.

The good news is that several classes of such senolytic drugs have been identified, so even if some methods fail, others should still be viable. Also, early results hint that a combination of senolytics may have the best results.

The final strategy the Stanford researchers looked at was cellular reprogramming, also known as induced pluripotent stem cells (iPSCs) – that is, returning cells to their pre-differentiated state as stem cells. As cells are lost due to damage or age, they are replaced with other tissue specific cells created by nearby stem cells dividing.

It may seem like an impossible task to revert a cell to a previous, and un-aged, state, however this happens all the time when an egg cell is fertilised, and its chronological age is effectively reset; otherwise we’d be giving birth to children whose cells were already old.

Attempts to reprogram cells in mice has seen several ageing features eliminated and youthful features restored such as extended telomeres and improved mitochondrial function. Some things, such as DNA methylation, aren’t quite so easy but signs are that these can be reset too. Importantly, when these newly rejuvenated stem cells then divide themselves, the newly created tissue cells are also rejuvenated.

One candidate to trigger cells to revert to iPSCs is OSKM (doxycycline-inducible reprogramming factor) with one experiment producing a 30% increase in average lifespan.

Even though tissue level improvements have already been observed, there is plenty more to learn. It is still unclear whether these benefits are due to the increased numbers of stem cells or by diluting the build-up of dysfunctional cells. Another key question is how long any effects last. The prospect of a one-off anti-aging treatment is never going to be likely, though an annual treatment to reset cells doesn’t sound too big a burden for living longer.

The paper then looks at whether these four strategies use totally distinct actions to produce rejuvenations, or if some of the underlying pathways are shared. These approaches include:

The authors summarise that although there are common molecular pathways much more research is needed to determine how, and to what extent, they work in each mechanism.

The researchers suggest that the first targets for rejuvenation treatments should be senescent cells and also vascular and connective tissue cells. As these cells exist throughout the body, any benefits to them would likely have broader benefits to the wider organism.

However, a warning is issued that the human metabolism is a finely tuned machine, and therefore we must be careful of unintended consequences:

More caution is raised about the realism of turning this rapidly evolving science into practical treatments:

All that said, the paper’s authors appear optimistic about the possibility of rejuvenation cells, tissues and organs and that the ageing process is not an unfathomable, or untouchable, mechanism. They even highlight that these are only the first approaches to be considered, and that there are already alternative suggestions (such as increasing telomere length or young microbiome transfusions) and therefore, no doubt, ideas beyond those that have not even been imagined yet.

I couldn’t conclude this blog summary of the research any better than the authors have done themselves:
“The coming years will undoubtedly see exciting developments in ongoing efforts to better understand, delay and potentially reverse ageing.” 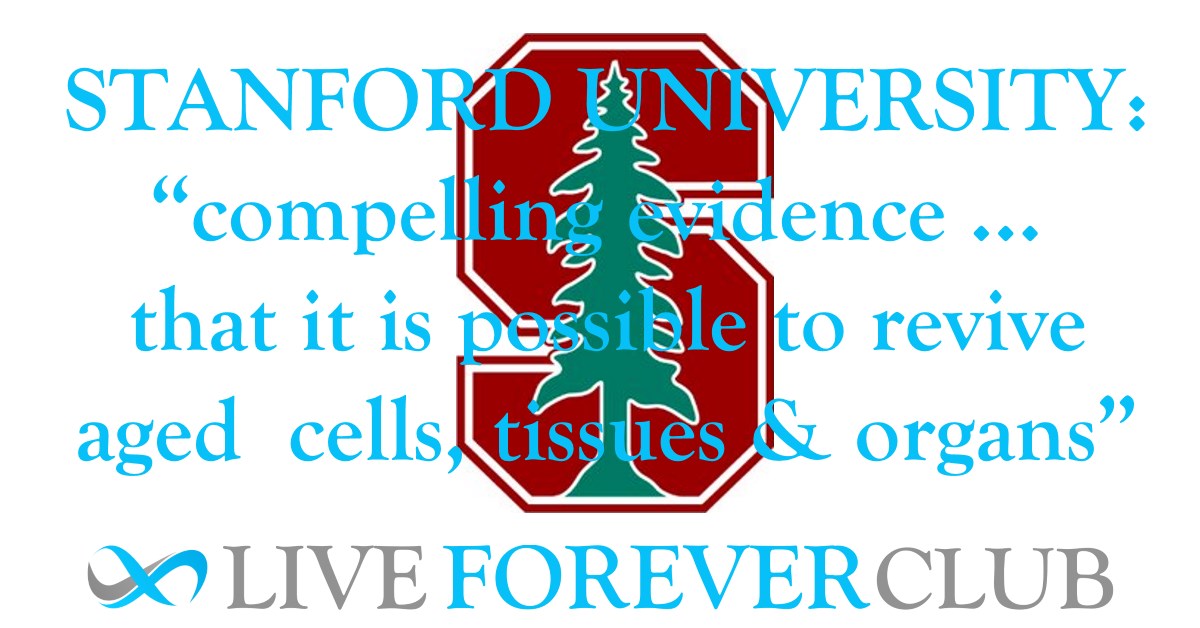 Biotechnology company focused on treating neurodegenerative and other age-related diseases

Professor of Genetics at Stanford University

Private research university, one of the world's leading research and teaching institutions

Age Reversal in Mammals – Has This Now Been Achieved?
21-May-2020 Biological age and biomarkers improved to that of rats half their age

Ambrosia Plasma relaunches - announces improvement in key ageing biomarkers
03-Feb-2020 The Club interviews Jesse Karmazin, CEO, to find out more about the trial, the FDA warning, and the relaunch