Coffee is one of the most widely consumed substances around the globe and over the past few years, various studies have revealed that drinking coffee in small amounts can add years to the average human lifespan. This inverse association has been observed for deaths due to heart disease, respiratory disease, stroke, injuries and accidents, diabetes, and infections, but not for deaths due to cancer. 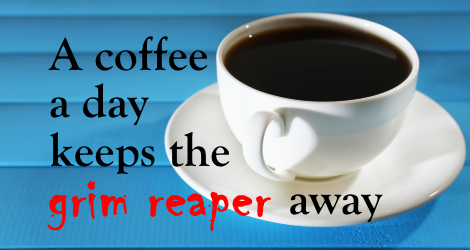 Consumption of moderate amounts of caffeine on a daily basis has been shown to decrease the age-related decline in the cognitive functions, thereby preventing diseases like dementia and Alzheimer’s disease (AD) and preserving intellectual capabilities. Animal studies showed this function to be partly due to the ability of caffeine to decrease the production of beta amyloid in the brain, which is one of the principal factors that can induce cognitive deficit and AD.

Although consumption of coffee has not been linked with increase in the risk of heart diseases like arrhythmias, it has been proved that drinking approximately 4 cups of coffee every day can lower the risk of heart attack from coronary heart diseases, one of the leading causes of mortality around the world. Studies reveal that components of caffeine can reverse the endothelial dysfunction which is the primary reason of plaque formation in the vessel walls and atherosclerosis, the basic pathology underlying the coronary heart diseases.

Caffeine has been shown not to be linked with increase in blood pressure which is also a risk factor for cardiovascular diseases. A prospective study also ruled out any causal relationship between caffeine intake and the risk of stroke, another major killer and suggested that caffeine can slightly lower the chances of stroke.

By protecting against different kinds of diseases associated with a high risk of mortality and declining the age-related decrease in the cognitive functions, caffeine has been shown to enhance the average lifespan in humans.

What do the guidelines say?

In the year 2015, the European Food Safety Authority (EFSA) published a guideline “Scientific Opinion on Caffeine” on the intake of caffeine, postulating that the total intake of caffeine from all sources was safe within the limits of 400 mg per day.

Although the report said that caffeine neither has any adverse effects on human reproductive system and the pregnancy outcomes nor does it have any teratogenic effects on the fetus, it was stipulated that the consumption of caffeine should be curbed during pregnancy. The guideline recommended that the amount of caffeine intake from all sources should be reduced to 200 mg per day in pregnant or nursing women.

How much caffeine in a cup of coffee?

Here are some typical caffeine contents - for a full list see http://coffeeandhealth.org/topic-overview/sources-of-caffeine/

You might want to check with your favourite coffee shop how much espresso they put in as standard – for example since 2012 Starbucks have used two shots in their lattes and cappuccinos.

The New England Journal of Medicine