Often overlooked, the health of your gut – that is, the balance of bacteria in your intestines – has a huge impact on the whole body, even including mental health. To find out more about the state of my insides, I took a gut health test kindly provided by Carbiotix. As always, no editorial influence was requested or provided in exchange for this donation.

A Quick Intro to the Gut Anatomy

This blog doesn’t get into too much detail about the physiology of the gut and the detail of its structure, but it is still worth having a quick reminder as to the main components of the digestive system. Feel free to skip this section if you’re familiar with your inner workings. 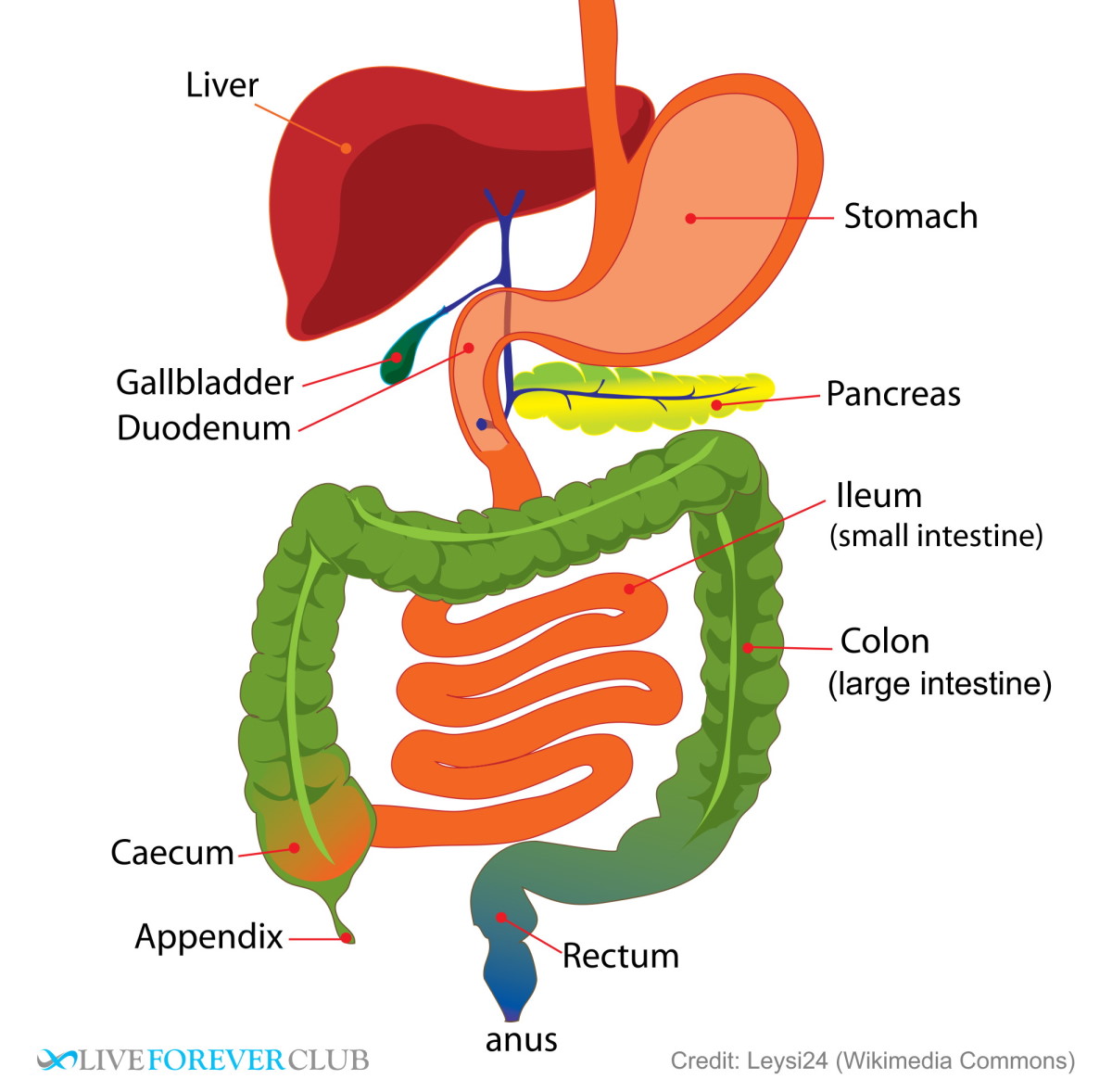 The main sections are:

Why is Gut Health Important?

Previously considered only relevant to digestive disorders, it has recently become clear that the health of the gut microbiome impacts almost every other part of the body. News reported on the club’s website include links to heart disease and cognitive decline, as well as an impressive study where blood pressure could be changed by transplanting microbiota of mice.

Although there has been less research in humans, this is now building up rapidly. Possibly the most incriminating of which is that the gut microbiome goes into a tailspin a few months before death and can happen before clinical symptoms appear.

Gut health has been shown to be a contributing factor in many chronic diseases including type 2 diabetes, heart disease and inflammatory diseases. Recent research has even shown a link between a healthy gut microbiome and Alzheimer's Disease due to the complex microbiota-gut-brain axis, with hints that in might affect other central nervous system disorders too.

Short chain fatty acids (SCFAs) are metabolites produced in the colon (the main part of the large intestine) by bacterial fermentation of dietary fibers – which means they aren’t produced by a chemical reaction, or breakdown, of food, but by the digestion of food by friendly gut bacteria.

SCFAs come in many different types, but the main ones found in the human gut are acetate, propionate and butyrate.

Mainly produced by bifidobacteria, lactobacillus and akkermansia muciniphila, acetate helps regulate the pH of the gut and also controls appetite.

Another SCFA that regulates appetite, propionate also fights inflammation and helps protect against cancer, as well as producing glucose in the liver. It is produced by bacteroidetes, firmicutes and lachnospiraceae.

Butyrate is the main energy source for cells lining the colon and helps prevent leaky gut. It also combats inflammation. Bacteria that produce butyrate include faecalibacterium prausnitzii and eubacterium rectale.

Carbiotix (https://carbiotix.com/) is a spinout from Lund University in Sweden. It was founded in 2014 after years of research alongside the Antidiabetic Food Centre. It offers its gut health testing platform as a white label service, which means other companies sell the service but it is Carbiotix doing the science in the background. It is also looking to produce microbiome modulators and has a patent on the production of its soluble fiber, called AXOS - a prebiotic ingredient extracted from corn bran.

As well as leading the science in gut health, the company is also aiming to be, and remain, the lowest cost provider of consumer gut health tests – which is a great ambition as everyone should have access to their own health status if they want it.

Carbiotix determines the types of bacteria present by their common DNA and RNA rather identifying individual species.

Now only available through Carbiotix’ partner businesses, my trial pack was delivered direct from the company, though I assume the service is basically the same whoever it is offered through, just with different branding. According to a 2020 press release, the LIVEYOUNGER Institute will be offering the service in the UK, though their website is has been under redevelopment since then so I can’t confirm that.

The Carbiotix test kit arrived in a simple, cleanly designed box. On its reverse, it had a sticker clearly showing the vial IDs and sample period which would be particularly useful for people taking the test regularly. 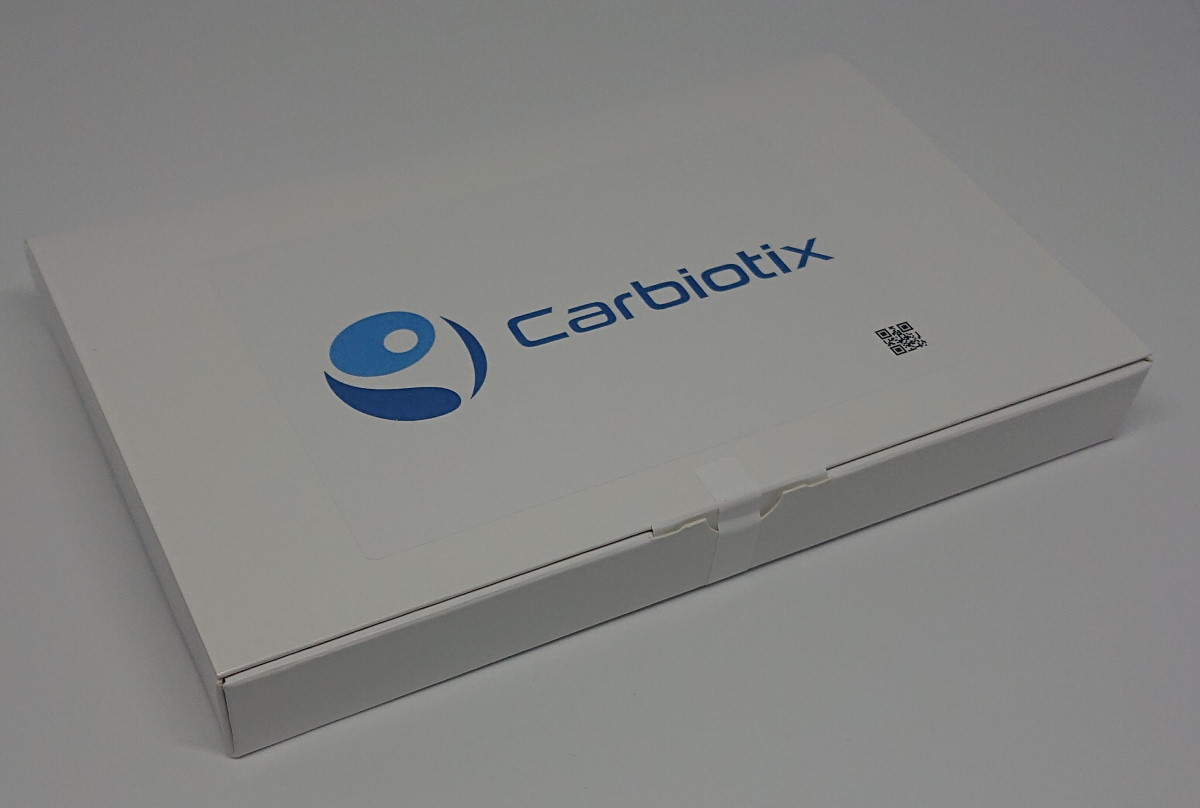 Inside, the swabs and vials are securely laid out: 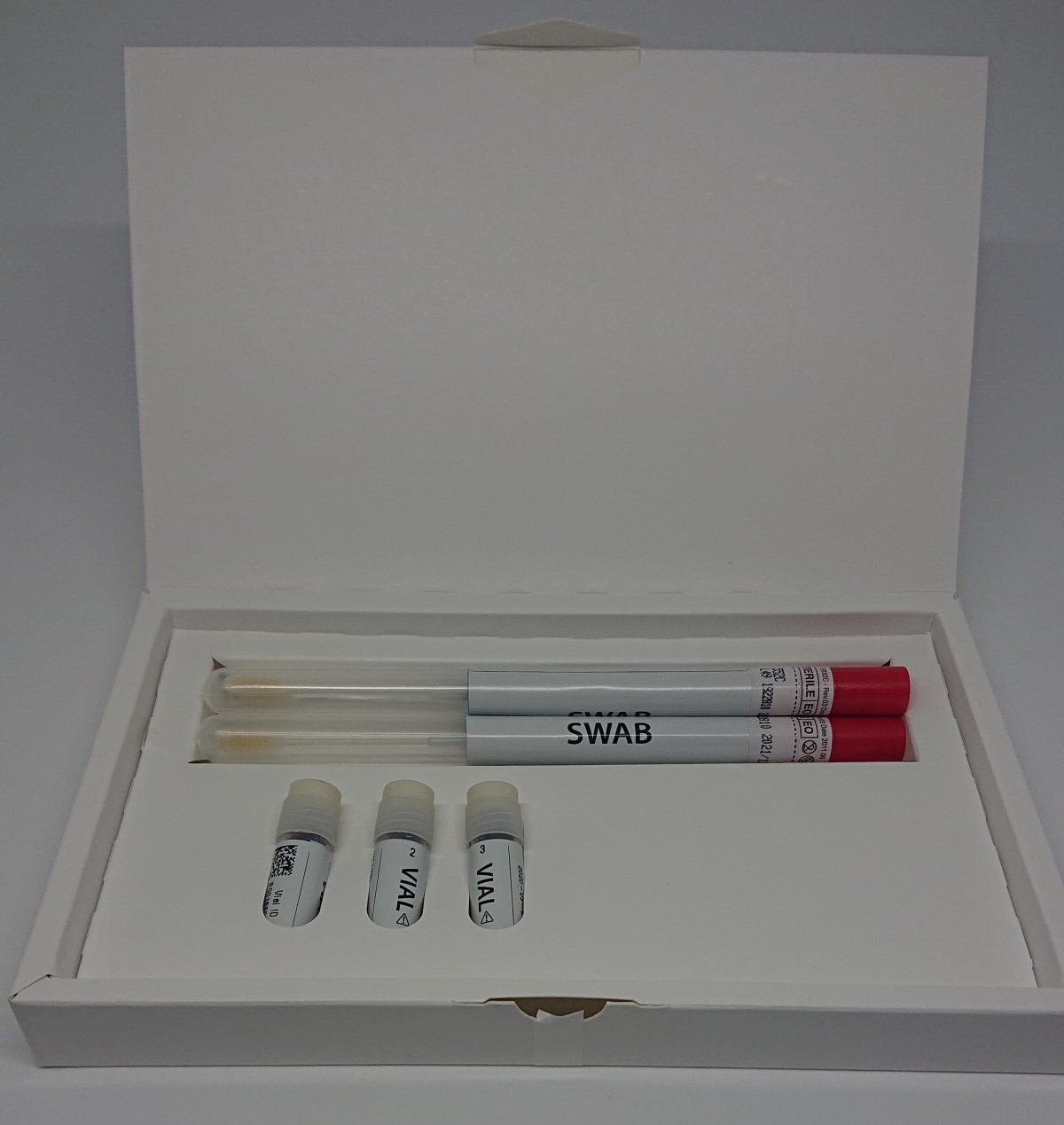 I’m not sure why the swabs are so long, maybe to allow for different techniques when using them (or because people really don’t want to get near the shitty end of the stick?!), but I’d have found a shorter version easier to handle:

The unique vial ID is also printed on every vial (on the other side, so I don’t share my personal IDs!):

The process is clearly explained in the instructions – and comes down to these 5 simple steps:

The procedure is quite simple, and in case you’re worried, not at all messy. I’ve done a stool test in the past and was basically provided with a small spoon and a container – there was no advice on how to collect the faeces so I had to create a rope bridge mockup using toilet paper! So big thumbs up to Carbiotix for making this a lot easier.

Basically, you rub the swab over the first-wipe toilet paper, and then stir that into the solution in a vial for a minute. Then, shake the vial for another minute. I found it easiest to have all of the kit on the floor in front of me, so this can all be one while still sat on the loo. No one really wants to look at their own pooh (though you should, regularly, to check for blood or other problems) but this process seems as easy as it could be.

You then store the vial until you’ve taken a swab for each of the one in the sample period (people can test at different frequencies), and then post your samples back using the reply-paid envelope included. I stored mine in the envelope along with a freezer block which I changed daily, though I’m sure the less squeamish could just put the envelope in the fridge or freezer – although you don’t have to do either.

A few weeks after posting the samples back, I received an email notifying me that my samples had been analysed. Carbiotix provides a nice and clear front end with a dashboard showing your result, though my understanding is that they will now focus on the sample collection and analysis, rather than the presentation or interpretation of results, and therefore depending on who you have purchased yours through then website, or phone app, may look different. 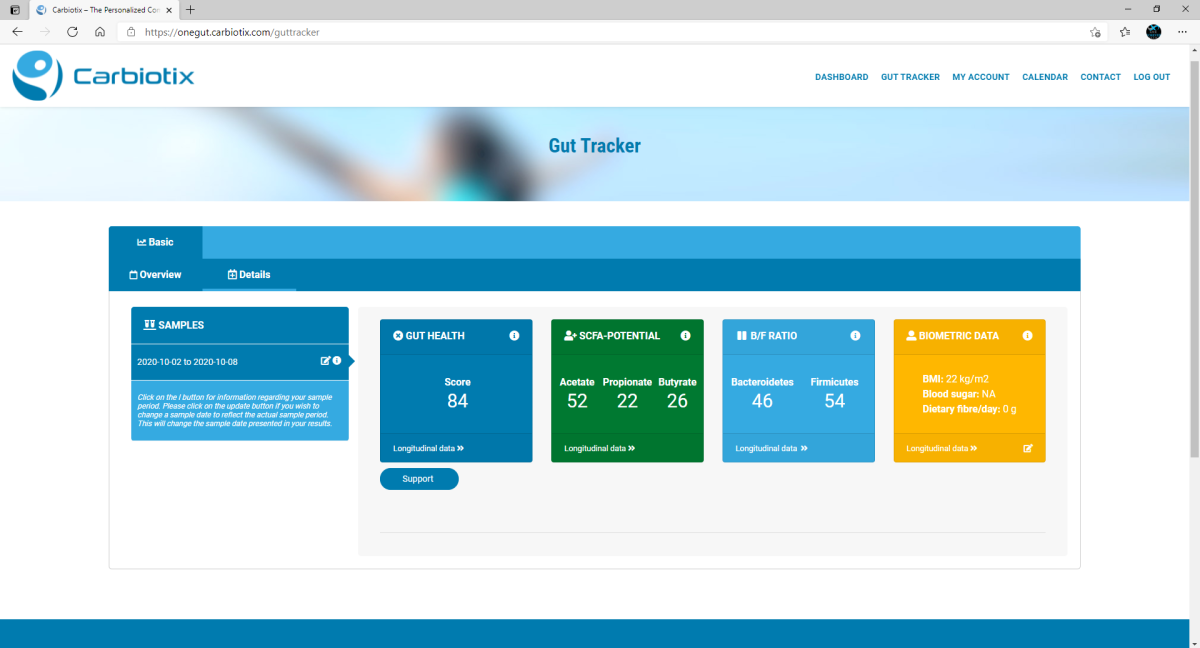 The dashboard provides a headline gut health score, and then provides more detailed analysis for those that are interested. The information panels also give a great introduction to gut microbiome and what all the numbers mean - very useful.

My overall score was 84% (100% is the optimum) which seems good, though it doesn’t say what percentage of the population that is better or worse than, so I can’t be sure whether I really should be happy or worried. The “gut health” score is based on how close your SCFA ratios are to ideal (see below) and also the type of bacteria present.

As explained above, short chain fatty acids are a key contributor to health – in the gut and beyond.

My gut microbiome test result was:

As acetate controls appetite, it’s interesting to see that my acetate level is quite low. I generally do feel hungry most of the time, and have a reputation for (healthy) snacking – so maybe it’s not all in my mind.

Butyrate – glad to see this isn’t low as it is a by-product of fiber digestion and I’m sure I’m getting enough of that with wholegrains, nuts, fruits and vegetables.

Although research indicates that the BF ration is an indicator of obesity, with firmicutes more prevalent phyla in obese subjects, there doesn’t seem to be enough evidence to produce a normal range.

Slightly surprising, given my build, but probably would be a useful ratio to monitor over time (longitudinal) rather than as a one off. That way improvements could be monitored without having a specific target threshold.

If my overall score had been lower, or if I experienced more digestive problems, then I’d certainly be tempted to sign up to a subscription so that I could monitor my gut health and see how lifestyle changes impacted it, as it’s always good to have an objective measure as well as personal assessments. And of course, if money were no problem, I’d be monitoring my gut microbiome regularly along with many other biomarkers to help keep me in tip-top condition.

In summary – don’t forget that the bacteria inside you is as important as (and affects) your blood biomarkers, so is something that should be investigated and tracked as part of a full longevity plan.

Your gut microbiome may be linked to dementia, Parkinson’s disease and MS – The Conversation, November 2020

What Are Short-Chain Fatty Acids And Why Should You Care? - Atlas Biomed, December 2020

The Influence of Probiotics on the Firmicutes/Bacteroidetes Ratio in the Treatment of Obesity and Inflammatory Bowel disease - Štrukelj et al, Microorganisms, Sept 2020 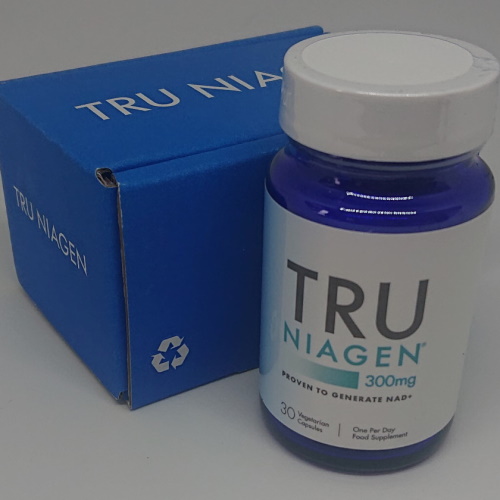 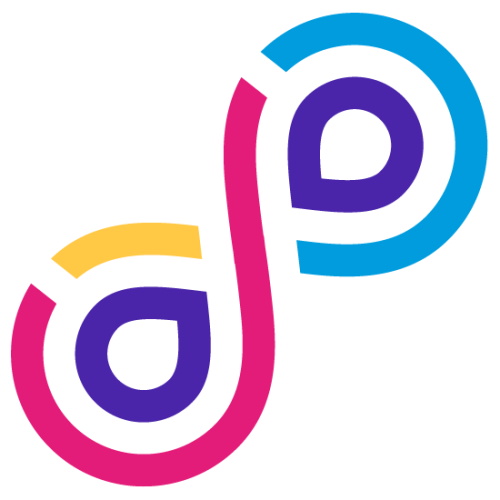 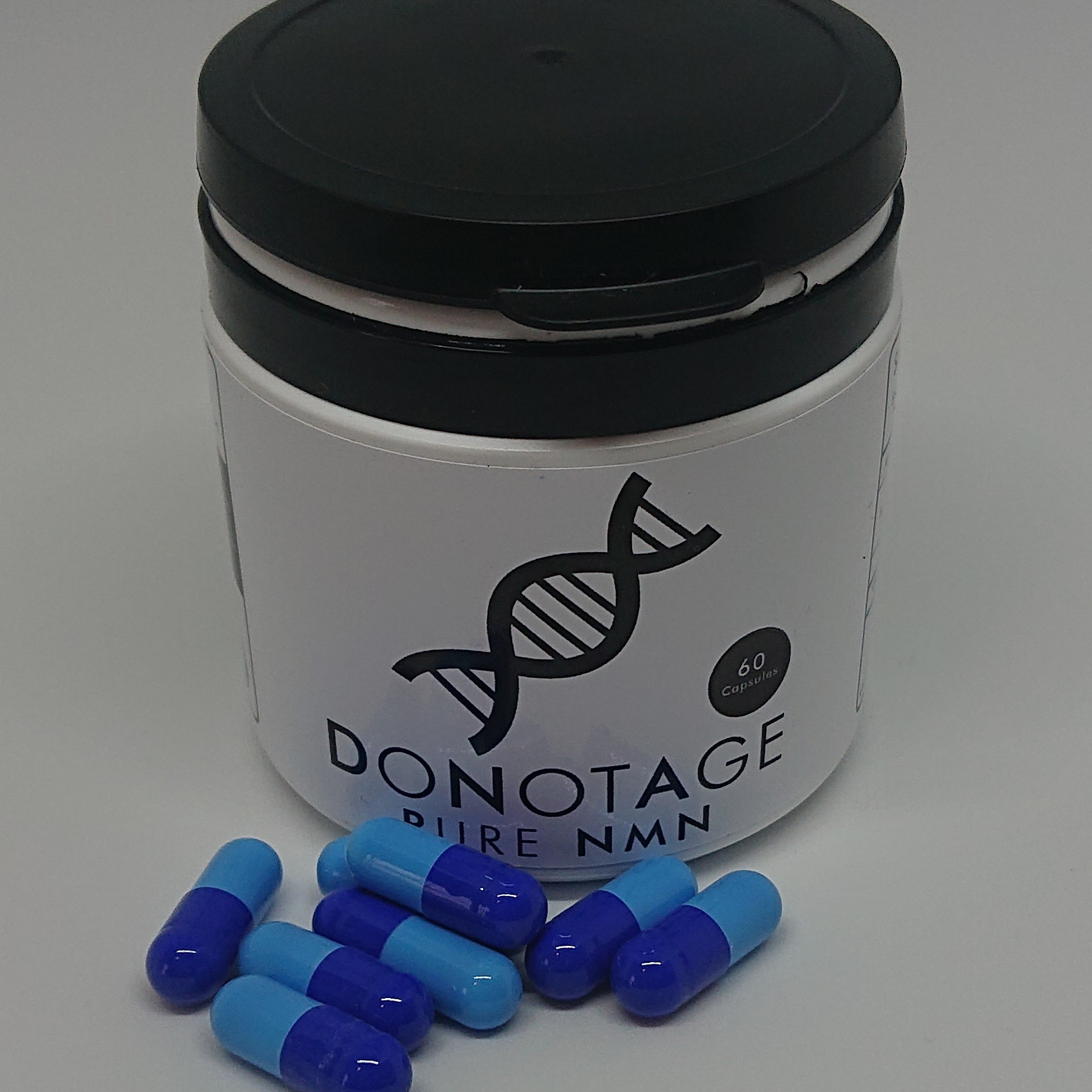 My N-of-1 trial of NMN capsules for a month 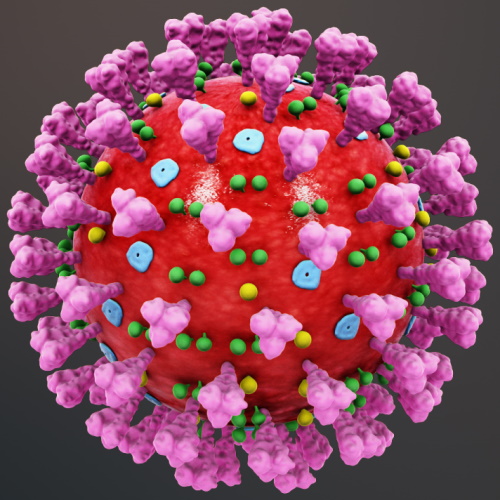 How to track your temperature to spot coronavirus

Fever is a key symptom of covid-19 – what is it, and how to spot its onset? Includes free Excel template to track and chart your temperature. 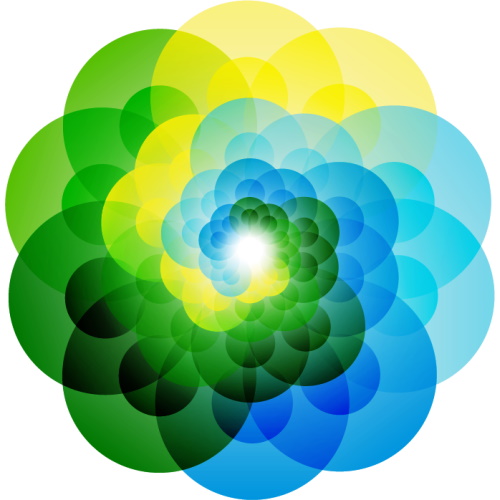