Although there is never going to be a single rejuvenation pill (nor single therapy) and we’re a long way from achieving any significant life extension, most people would like to think that a wonder-supplement exists that at least helps slow down ageing a little.

Leading the race in the anti-ageing community to be the super-supplement are NAD boosters and senolytics, with NAD boosters split into NR, NMN, NA or even NAD itself. Here I look at Tru Niagen, a patented version of nicotinamide riboside, which I tried for 2 months to see if I could notice a difference, both subjectively and objectively. I took measurements (blood and physical biomarkers) before, during and after the trial which I report on below.

What is nicotinamide riboside (NR)?

Nicotinamide riboside is an alternative form of vitamin B3 that was first discovered as a growth factor for and influenza bacterium back in 1944. More recently, it has been studied as a NAD+ precursor that could slowdown the onset of age-related diseases.

For more information about NAD, and a summary of its various pathways, see What is NAD in my recent Jinfiniti NAD Test Review blog post.

Beyond its function as a NAD+ precursor, I’ve been unable to find any mechanisms that NR is involved in directly. However, given the importance of NAD+ to our metabolism, that is more than sufficient benefit as preventing the depletion of NAD+ with age has many impacts, including:

Niagen is is ChromaDex’s patent-protected form of nicotinamide riboside (NR). So, it is basically just NR, but as will all supplements and biomolecules, it is not just the ingredients on the label that counts. It is also how the substance is manufactured – both from a chemical process perspective (which affects how the body will metabolise it) and also its quality control process to ensure that you are getting what it says on the label, with no nasty contaminants. ChromaDex is audited by NSF International to check that it is following the GMP (good manufacturing process) regulations. 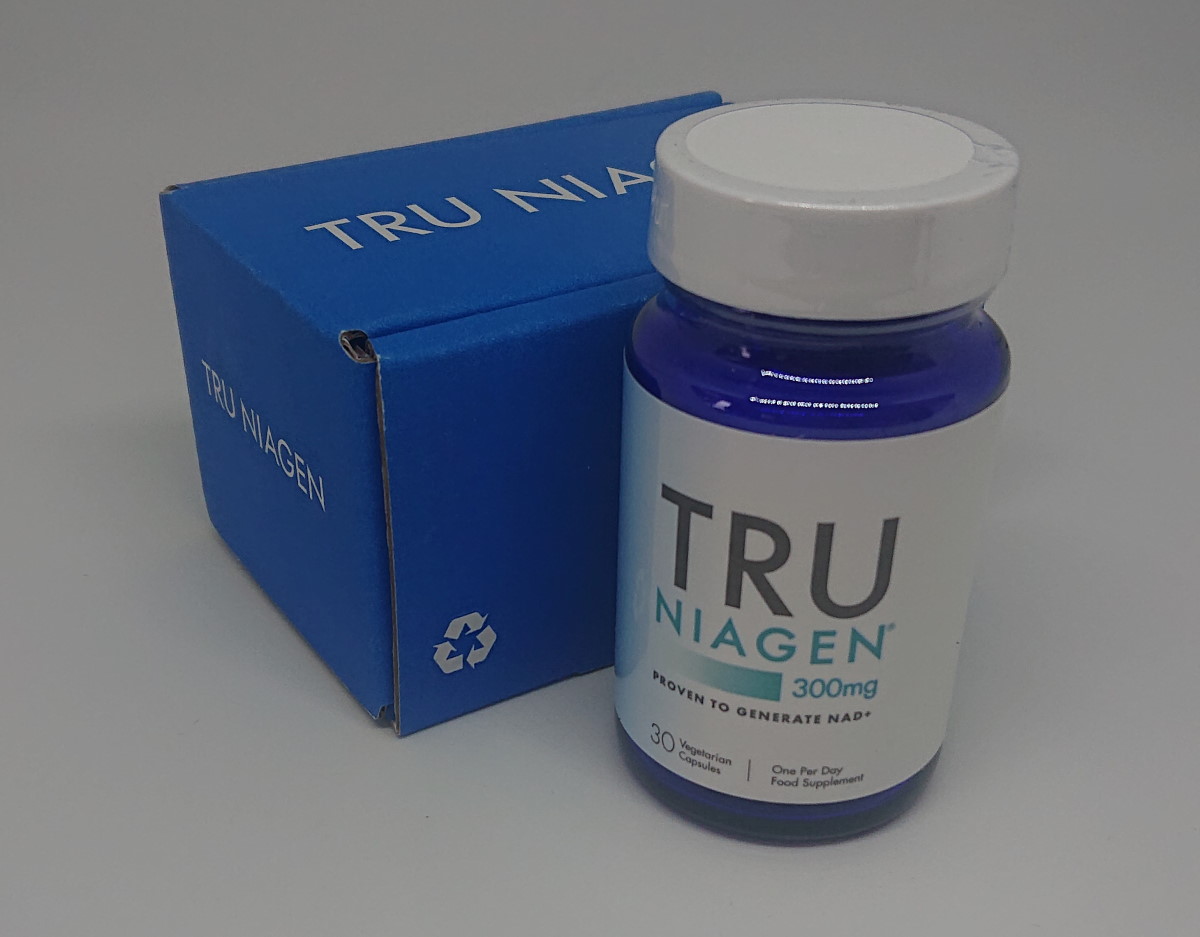 Chromadex hold several patents related to the production of nicotinamide riboside including a specific yeast strain, novel crystalline forms, and methods of preparation. They also claim that it is the world’s first and only known FDA-safety reviewed form of NR.

Whether it is radically different to other, well-prepared, NR I can’t say. However, because of its consistency it has been in used in several clinical trials that have shown it safely and effectively increases NAD+ in humans.

If you’re not keen on taking supplements, then unfortunately it is near impossible to get enough in your diet from food sources alone.

In 2019, the European Food Safety Authority (EFSA) Panel on Nutrition evaluated the safety of nicotinamide riboside chloride (i.e. Niagen) as a novel food, and as part of that concluded that “the contribution of nicotinamide riboside from food sources … is too small to be relevant for the safety assessment.” In case you’re wondering, it also concluded that Niagen is safe and bioavailable.

The only identified food source of NR was milk, but a pint contains less then 0.5 mg of nicotinamide riboside – which is about one thousandth of the recommended daily supplement dose.

I took the recommended dose of one 300mg capsule per day for 2 months, which should allow enough time for any effects to build up, and also for any weekly measurements to become statistically significant.

Unlike NMN, which is best stored in a refrigerator, NR can be stored at room temperature, and EFSA has determined that it is stable for at least 36 months at 25 degrees C.

To determine the impact of NR supplementation, and to allow a future comparison with NMN supplements, I've picked pretty much the same blood and physical biomarkers as for my NMN trial. In addition, Jinfiniti kindly donated a couple of intracellular NAD blood tests so I was able to do a before and after test for that as well.

The following equipment was used:

I'll provide a full update on blood biomarkers and physical measurements soon, for now I just have the result of my intracellular NAD level tests and biological age assessment.

Almost of the suggested benefits of nicotinamide riboside comes from its role as a NAD+ precursor in the NAD salvage pathway, hence a key measurement is whether my NAD+ levels increased or not.

Although Jinfiniti’s Professor Jin-Xiong She doesn’t think there is sufficient evidence of a circadian rhythm related NAD-fluctuation, as reported by some research, I thought I’d take the second test at the same time as the first one just to be safe.

NAD level tests taken just before and just after the trial showed my intracellular NAD+ level increase from from 26.0 μM to 27.8 μM, so definitely in the right direction. It pushes me away from the border with “poor” but still very firmly at the bottom of the “sub-optimal” zone.

This is surprising given a study into the safety of NR (specifically Niagen) saw a typical increase from low-20s ug/ml to low 30s ug/ml within 2 weeks, and then maintained at that level. The increase was dose dependent with 100 mg/day rising to about 25 ug/ml and 1000 mg/day hitting 50 ug/ml. 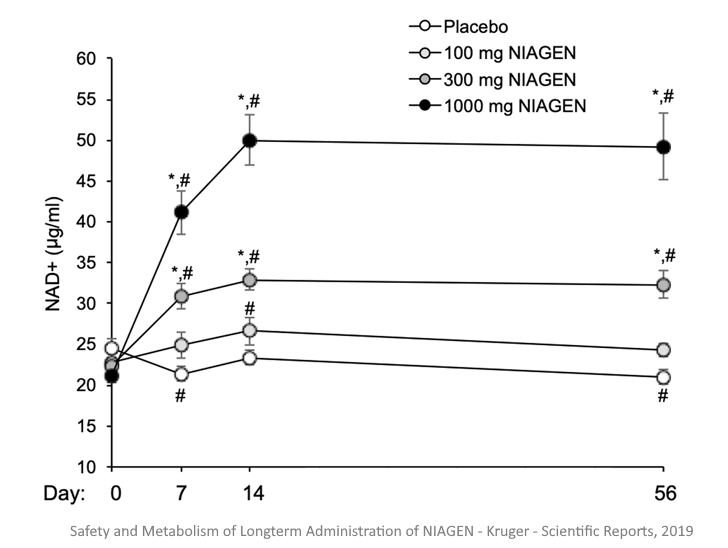 This same study determined that oral NIAGEN is safe and well-tolerated up to 1000 mg/day for 8 weeks. So, I could consider doubling my dose without any safety concerns.

I’ve recently started using Young.AI to track my biological age (full review pending) as it allows you to easily upload a blood test report and it reads all of the results automatically, then uses it to determine your biological age. I’ve upload blood panels from over 10 years ago and have seen a steady improvement from being biologically 10 years older than my chronological age, to only 5 years older last year.

Hence, I thought this combined score would be a good way to see if NR improved my body in a general way. However, unexpectedly, the “before” biological age made a big improvement jump since last year – for no obvious reason as I’ve not changed my lifestyle significantly since then. The “after” biological age then came out 3 years worse, but if I was comparing it to the previous year only then it would have looked like a positive outcome. 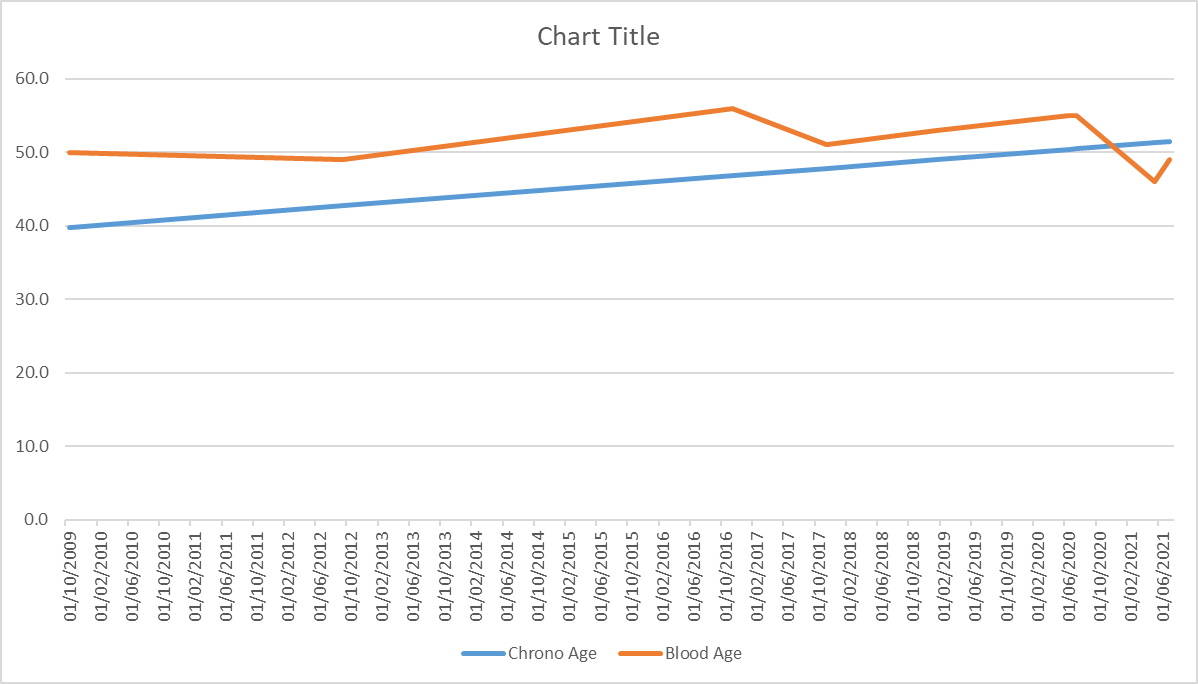 I think I’ll put this down to inconclusive – due to the unanticipated change at the beginning of the trial.

As well as the direct impact on intracellular NAD levels, I also wanted to see whether there would be an effect on a broad panel of blood biomarkers. So, I took a Medichecks* Advanced Well Man blood test the day before starting the NR supplements, and again, one day after the trial. Let's look at how some of key biomarkers responded.

I’ve highlighted any that have varied more than 10% in either direction.

ALT is an enzyme that breaks down food into energy. Normal ranges vary between labs, though generally an upper limit of normal is 40 or 50 IU/L, and males usually have slightly higher readings. Higher levels of ALT in the blood can be and indicator of liver damage, although there are other possibilities such as muscle damage.

My ALT level was already in a reasonably good place, but and has now dropped to it's lowest level since I started blood tests 12 years ago. Interestingly, the last big drop (from 28 to 19) was during my NMN trial - so perhaps NAD boosters have a big impact on the liver.

Bilirubin is a byproduct of the normal breakdown of red blood cells and is eventually excreted as bile.  A high level of bilirubin can indicate liver disease (or bile duct problems) as it passes through the liver which should break it down. Alternatively, it could be due to higher rate of red blood cells being broken down.

The Mayo Clinic says that low levels are usually not a concern, so a one-third drop from 14 to 9 umol/L looks like a good thing.

The C-reactive protein high sensitivity blood test (hs-CRP for short) is able to monitor fluctuations in the inflammation marker, before it gets to the level of indicating an inflammatory disorder such as arthritis or inflammatory bowel disease. Although the normal range is less than 5, a value greater than 2 can suggest a higher risk of developing coronary artery disease.

A high CRP test result can also be a sign of acute inflammation, and I did feel a bit under the weather towards the end of the trial, so it could just be that I had come common cold bug (or similar) at the time. However, it is a coincidence that my CRP reading also shot up during my NMN trial - if NAD booster increase general inflammation then that would not be a good thing. 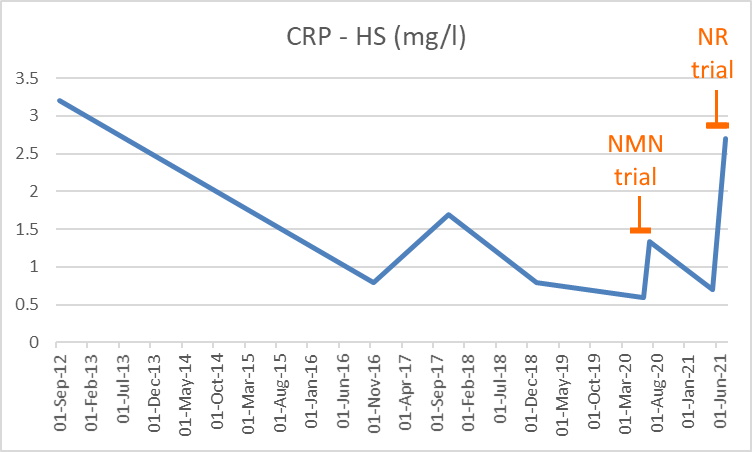 eGFR stands for "estimated glomerular filtration rate" - that is, how much blood passes through the glomeruli (tiny filters in the kidneys) each minute - and is considered a good measure of kidney health.

During my NR trial, my eGFR result dropped 21% (from 84 to 66) and is getting very close to the lower limit of normal (60) which can indicate possible kidney disease. I had a similarly low result in 2018, so one to watch for now.

The thyroid is gland in the neck which produces hormones that influence many metabolic processes in the body, and affects things such as your heart rate and body temperature. However, thyroid-stimulating hormone (TSH) is produced by your pituitary gland (in the brain), and this affects how much of different thyroid hormones are produced by the thryoid. Usefully, changes in TSH can often predict problems before the actual level of thyroid hormones in the body becomes too high or low.

Thr drop from 2.37 to 1.28 mIU/L is almost half, so initially I was a bit concerned. However, (i) the lower limit of normal is 0.27 (varies slightly with age) so still safely in the normal range, and (ii) historically my TSH result has varied between 1.4 and 1.9, so it looks like the original 2.4 reading was the outlier, rather the the post-trial 1.3.

White blood cells (or leukocytes) are are range of different cells critical to the body's immune system, so a low white blood cell (WBC) count generally isn't a good thing. Historically, mine has range from 3.5 to 5.2, so always in the low range of normal. During the NR trial my WBC count dropped from 4.8 to 3.5, so within my normal fluctuation range. I'm not sure how quick WBC levels can vary, but white blood cells only last a few hours or days, so perhaps the level and change a lot in the period too, so this one I'm going to put in the "one to watch" category.

I’ll think about whether I will restart NR supplements once I have reviewed all of my blood and physical biomarker results.

Given the complexity of cell metabolism, and the differences seen between individuals, my first reaction is that choosing an appropriate NAD booster will be very much affected by your individual response to the various NAD pathways. The effect of which is probably best assessed by monitoring your NAD level.

Nicotinamide Riboside - The Current State of Research and Therapeutic Uses

How to track your temperature to spot coronavirus
14-Apr-2020 Fever is a key symptom of covid-19 – what is it, and how to spot its onset? Includes free Excel template to track and chart your temperature.