In a previous blog post we looked at the benefits of whole body cryotherapy (WBC) and how it affects the body at a cellular level. The theory looked good, but what is it like in practice? To find out, I booked myself in to one the UK’s leading providers – CryoLabs in Poole, on the south coast of England.

First impressions, before I even arrived was that the facility was on a small industrial estate just off the ring road rather than at a swanky spa resort overlooking the sea. And, actually, that suits me fine – I’m interested in the practical benefits and don’t really want to be paying for plush surroundings and overpriced mineral water.

Ian Watson, CryoLabs’ founder, welcomed participants at the reception and I quickly realised it was a well organised, efficiently run process. After the usual medical and disclaimer forms were completed, I was handed a collection of insulating clothing to protect the body’s extremities – head band, gloves, socks and slippers. Apart from that, there were just some sensible precautions to adhere to such as removing metal piercings and making sure you are dry – you don’t want to come out as human popsicle! 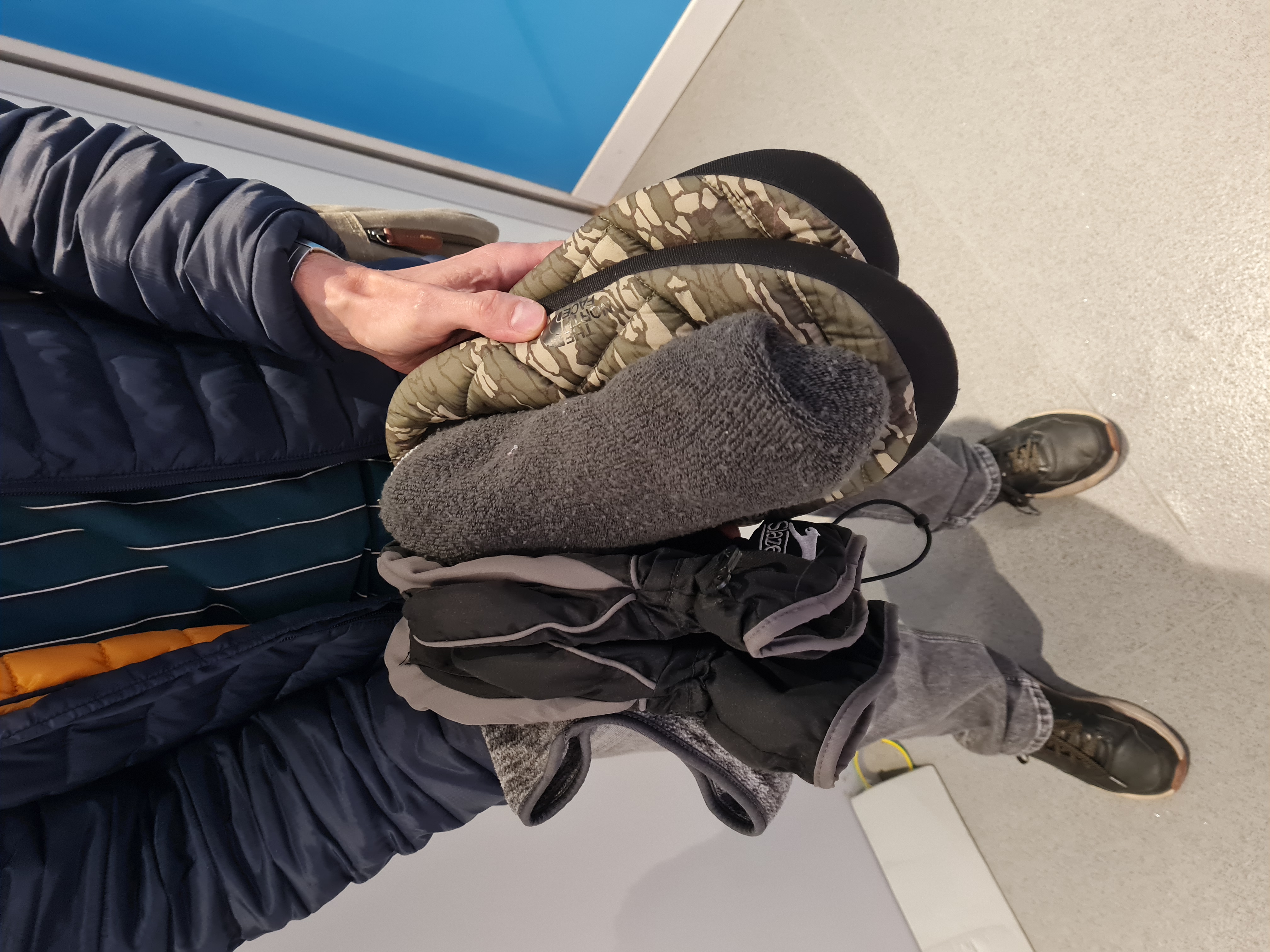 I had assumed most people would be, like me, doing it as an experience, but there were only a couple of other newbies and the rest (of roughly 3 groups of 6) were regulars attending for the health and performance benefits.

Coming up to the allotted time, Ian gathered the freshers together and gave us an informative talk to introduce us to the chamber and how the session would work. This helped reduce the fear of the unknown... just leaving the apprehension of walking into a chamber which was being cooled down to a very, very low temperature. It was possible to see the control panel and the temperature slowly working its way down to -135 °C (-211 °F). 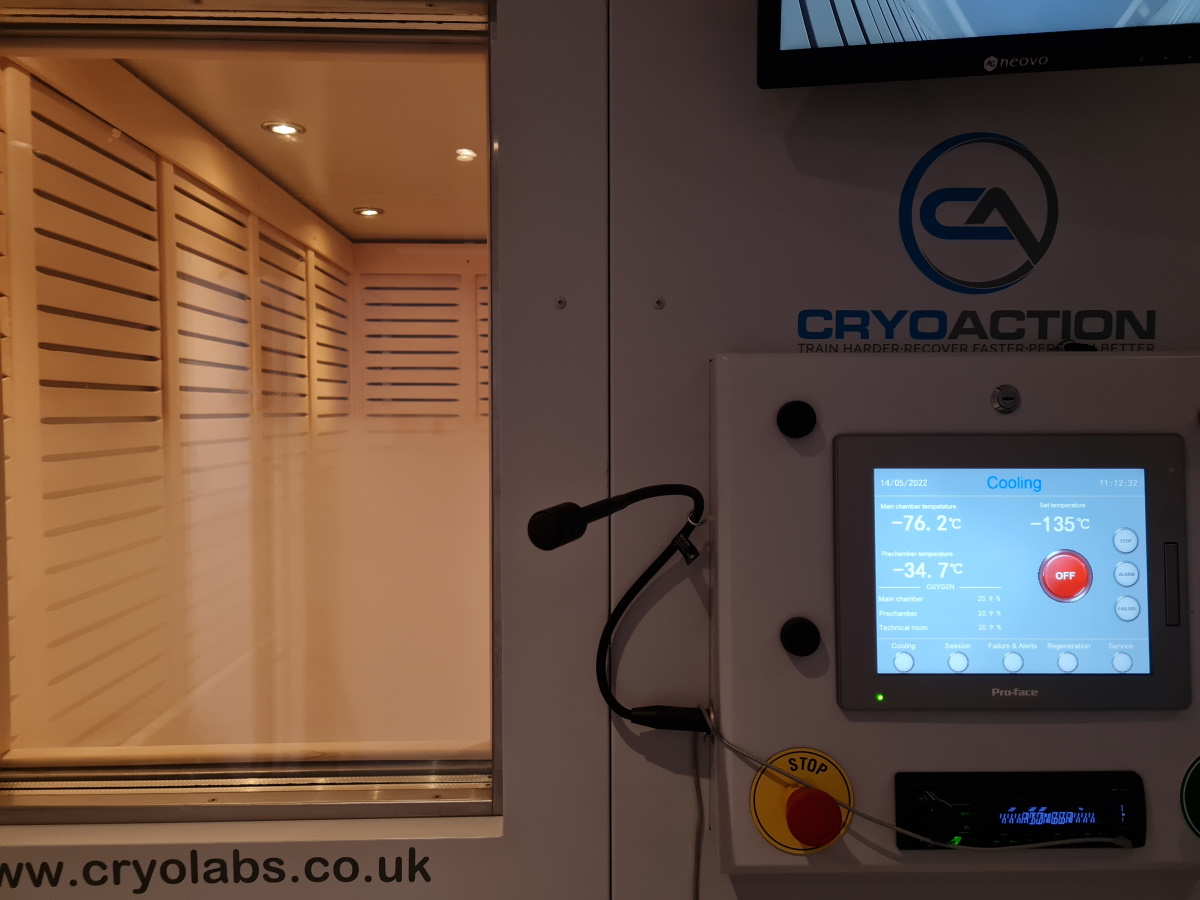 Inside the cryotherapy chamber

So, the time has come. Luckily half of the first group are regulars and they’re happy to operate the doors, so I just have to follow them in. Initially you walk into an antechamber that prevents the main chamber’s temperature dropping too much when its door is opened – though even this acclimatization room is kept at a chilly -70 °C (-94 °F). 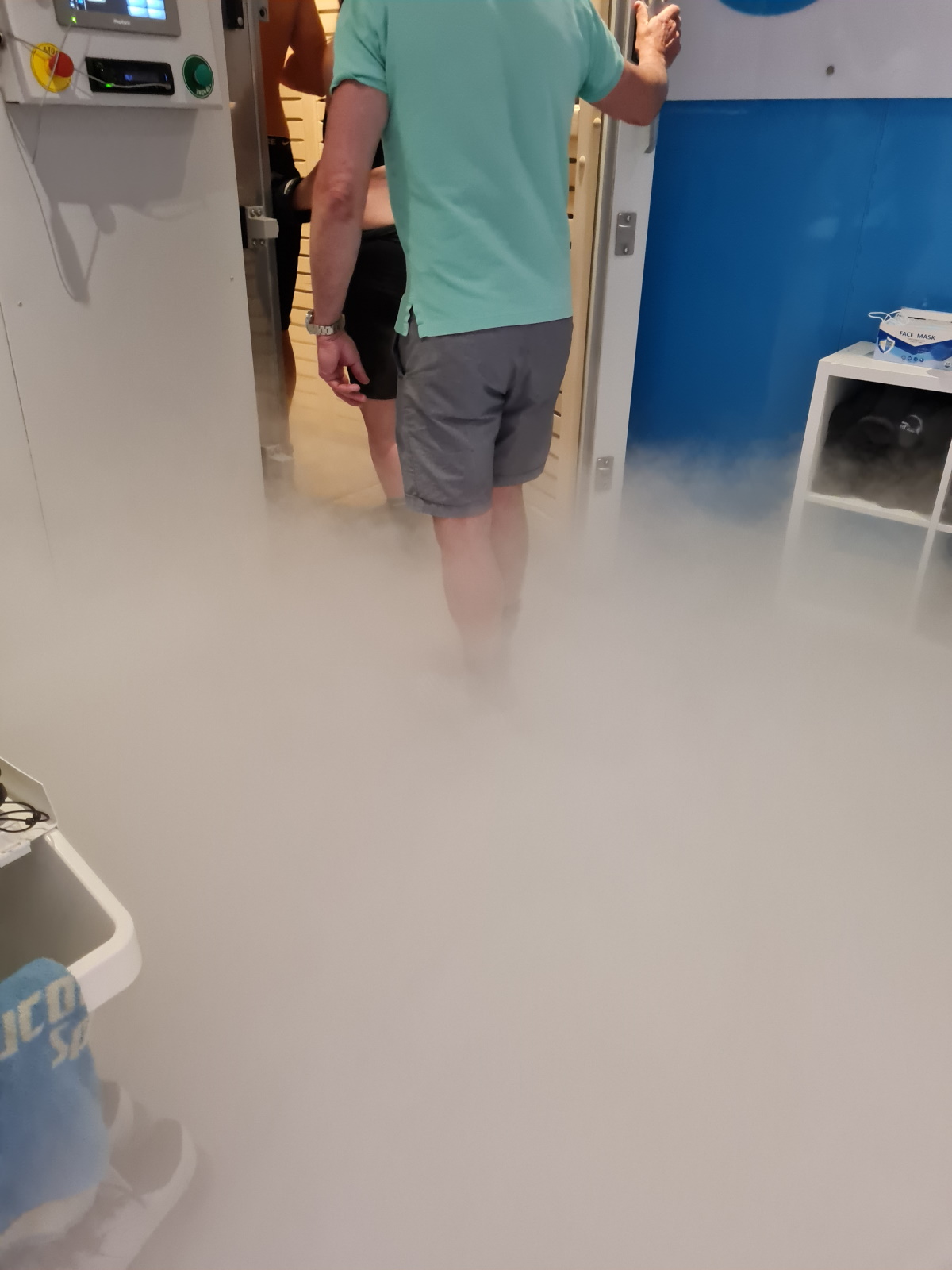 Once we’re all in there, outer door shut secure behind us, and temperature stabilised, it’s time to go into the main chamber. It’s cold! But not as cold as expected. Maybe the body can only interpret a certain range of air temperatures, or it doesn’t respond until the cold penetrates a bit deeper, but initially it felt no worse than walking into a refrigerated storeroom.

The routine is to walk around, which, in the confines of the chamber, means circling around one after another in a small circle. There was music playing and some people were making discrete disco moves as they shuffled. To me, with the mist rising up as we disturbed the air, it felt like some mystical version of musical chairs!

What really surprised me was that we were able to talk quite easily. I’ve run in just-under-zero Celsius temperatures and it can be painful to breath the cold air in, hence that was the thing I’d worried about the most, but that wasn’t the case at the cryotherapy temperatures at all.

Something else some people may be apprehensive about is the size of the chamber. However, one of the participants I spoke to while inside said she suffered from claustrophobia but was OK with the experience as we kept moving and the chamber had a window.

There was a large digital clock in the chamber, and it was around the minute mark that I started to feel cold. Maybe the elation was dropping, maybe I’d got used to the strange environment and was now starting to notice the physical effects. 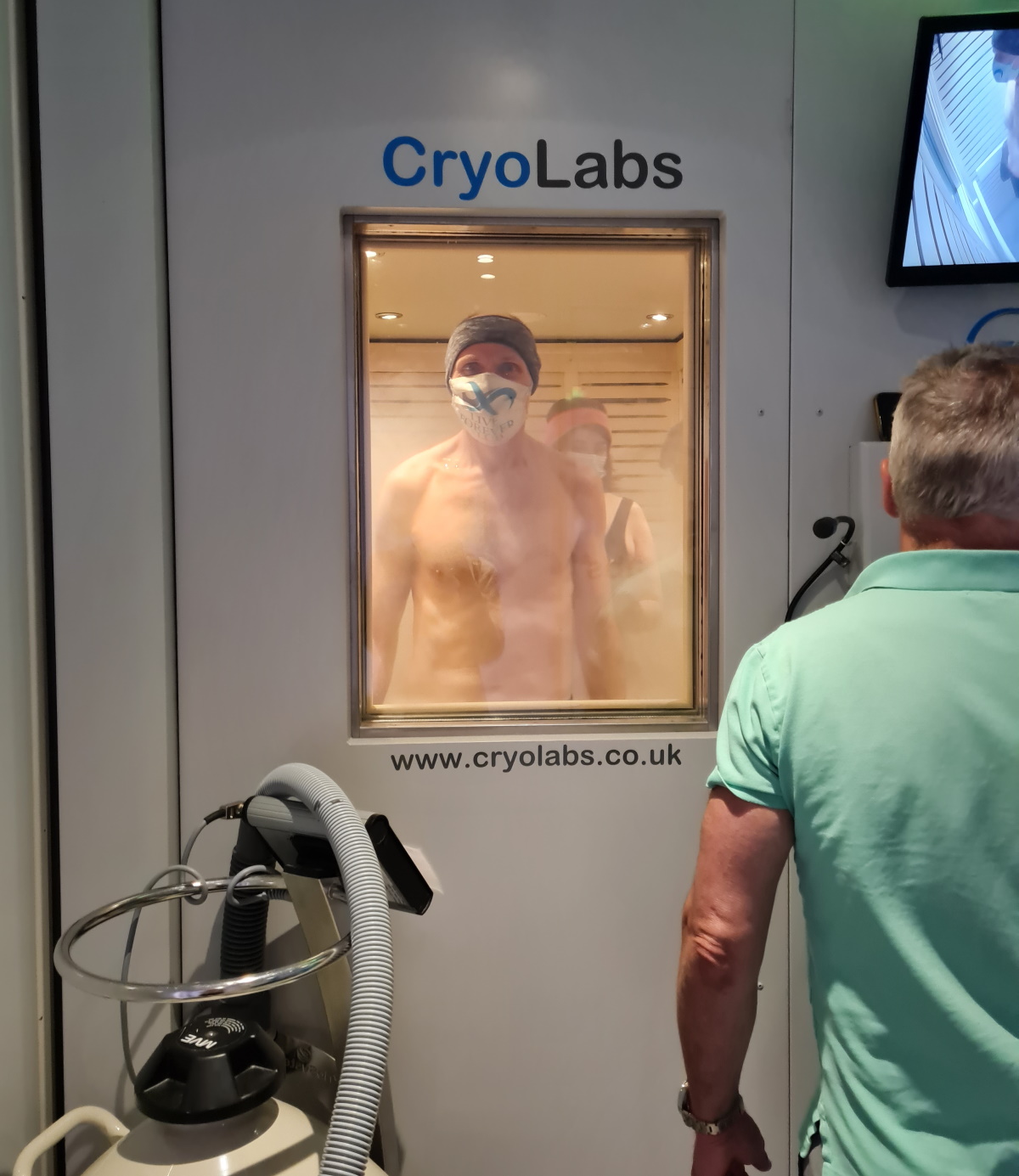 By 2 minutes I could feel the skin on exposed areas tightening, like chocolate sauce hardening and cracking when poured on ice-cream. I noticed that the chit chat in the room had died down a bit too, so maybe it wasn’t just me starting to feel the cold. It wasn’t exactly uncomfortable, but it was enough to make my body wonder what was going on, and I had to focus a bit more on just keeping in step with the others.

But at no time was I worried, the whole environment felt safe and professional, and we were being monitored at all times from the outside both through the window and via CCTV so there was no risk of someone disappearing into the mist at the back.

After what had felt like a very long 3 minutes it was time to get out, done in a reverse of the entry process (i.e. one door at a time). It had never been painful, or even arduous, but even so I was glad to get out. And once out you warm up almost immediately because you haven’t been immersed long enough for your core temperature to drop.

I felt slightly elated once back in the gym area, and my tingling skin now felt it was radiating freshness. Though, in case you do need a bit of a mental pickup there is an (unofficial!) emotional support dog wondering around :) 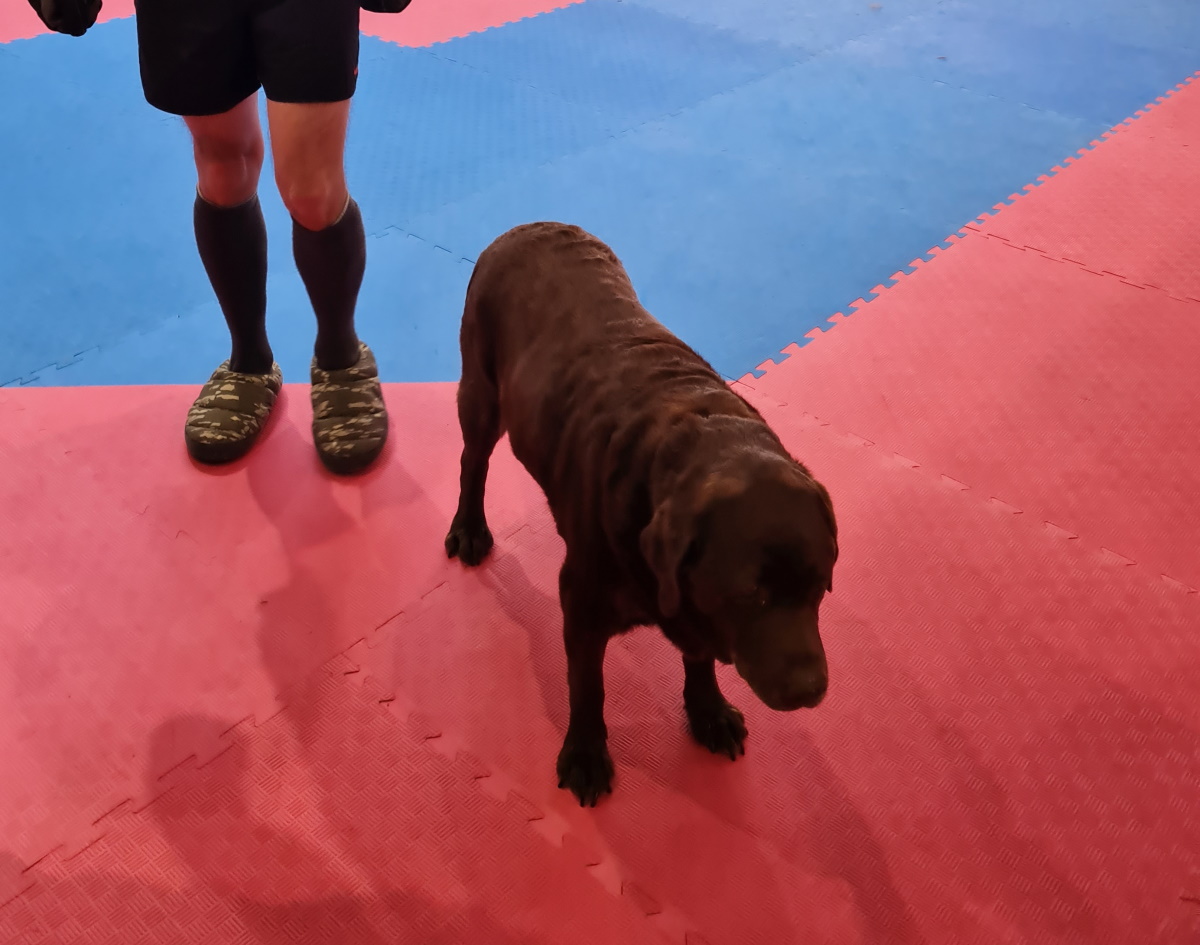 CryoLabs emphasises that its two facilities (Poole and Glasgow) are the only publicly available clinical quality cryotherapy chambers in the UK. The important difference being that they are externally chilled using nitrogen which allows it to cool faster and to recover its low temperature after people have entered the chamber. Apparently, other facilities either use electric cooling (fridge style) which is slow and doesn’t maintain the temperature so well, and/or don’t have a pre-chamber resulting in a big rise in temperature when you first go in – so worth checking the details wherever you may be considering visiting.

Even if it’s just for the experience, it’s definitely worth a try. Or, if you’re hoping for some short- or long-term health benefits, then it’s a quick and easy therapy to opt for.

All in all, I had a great day out – and for those interested here are some more holiday snaps! 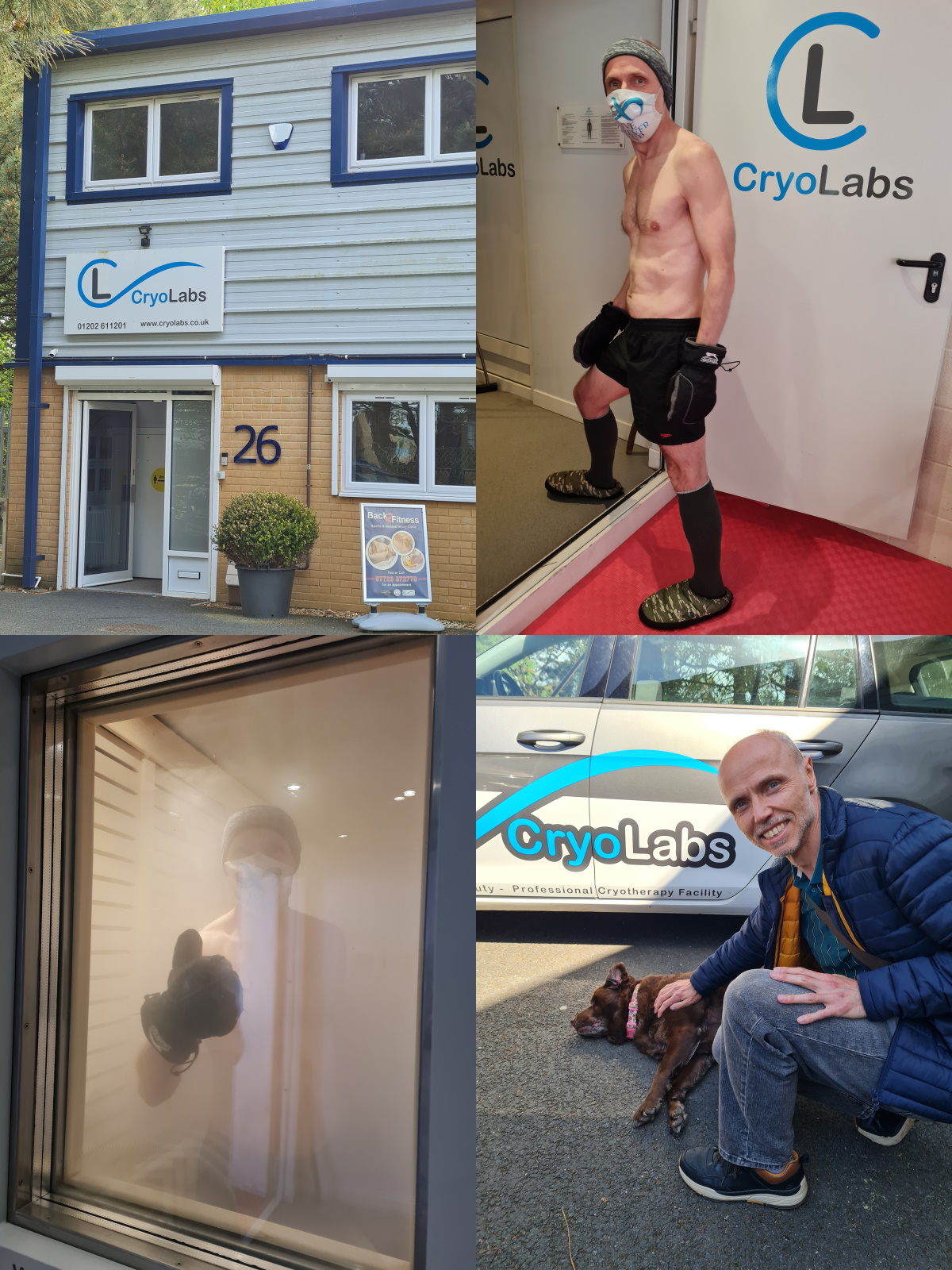 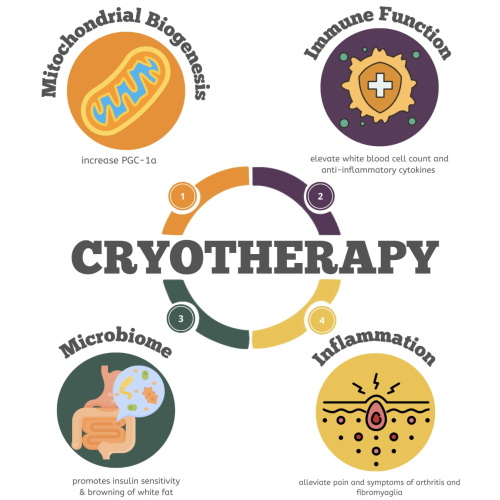