Cryotherapy is any treatment that involves the use of freezing or near-freezing temperatures. People have used cryotherapy as a means to better health for centuries. Today there are many different types of cryotherapy.

Whole body cryotherapy (WBC) is the type of cryotherapy that exposes the whole body for a few minutes to cold, dry air that can be down to -178 °C (-289 °F).  WBC takes place in individual or group chambers filled with cold vapours. In a modified version, partial body cryotherapy, the person enters an individual cylindrical-shaped chamber with an open top. In this format, the legs, torso and optionally the arms are exposed to cold air but not the head. The cylinder functions either electrically or fills up with nitrogen gas.

Other types of cryotherapy include cold water immersion and local cryotherapy. Cold water immersion (made popular by the “ice man” Wim Hoff) entails submerging in water colder than 15 °C (59 °F). Water, due to its higher thermal conductivity does not need to be as cold as the air. Humans cool two to five times faster during immersion in cold water, compared to exposure to air of the same temperature[1].

The most widely used type of cryotherapy is local cryotherapy. This is the well-known application of ice packs on various areas of the body, especially for myoskeletical injuries. More recently, exposure of the head to very low temperature, by wearing a cap, is used as an (unconfirmed) way to reduce radiotherapy-induced hair loss[2].

What happens to the body during cryotherapy?

When exposed to the cold the body responds immediately by trying to reduce heat loss and increase heat production. The first physiological response is vasoconstriction (constriction of the blood vessels) and a decrease in skin blood flow1. A result of these two mechanisms is a drop in the rate that the heat transfers from the body to the environment.

A key player in the body’s response to cold is norepinephrine. Norepinephrine, also known as noradrenaline, is both a neurotransmitter and a hormone. Only 20 seconds at 4.4 °C (40 °F ) in cold water or whole body cryotherapy for two minutes at -110 °C (-166 °F ) are enough to increase norepinephrine 200 to 300 per cent. Norepinephrine mediates vasoconstriction via two mechanisms.  The first one is the local cooling of skin blood vessels. The second mechanism, reflex cooling, uses messages sent from the skin to the brain that the temperature is dropping[4]. A third mechanism for vasoconstriction, in which norepinephrine does not participate is drop in core temperature.

As mentioned, the body also tries to produce more heat to counteract the heat loss. This cold-induced thermogenesis mainly happens through skeletal muscle contractions either by voluntary movement (like exercise) or through shivering. Shivering is at its maximum when the core temperature falls to 34–35 °C and stops at 31 °C. Another way of thermogenesis is through activation of brown adipose tissue[5].

Many potential benefits are linked to cryotherapy. These include mitochondria biogenesis and metabolic health, immune function and inflammation and microbiome diversity. Positive effects on the brain like mood, cognition and brain health may also be promoted[6]. We are going to focus on some of them. 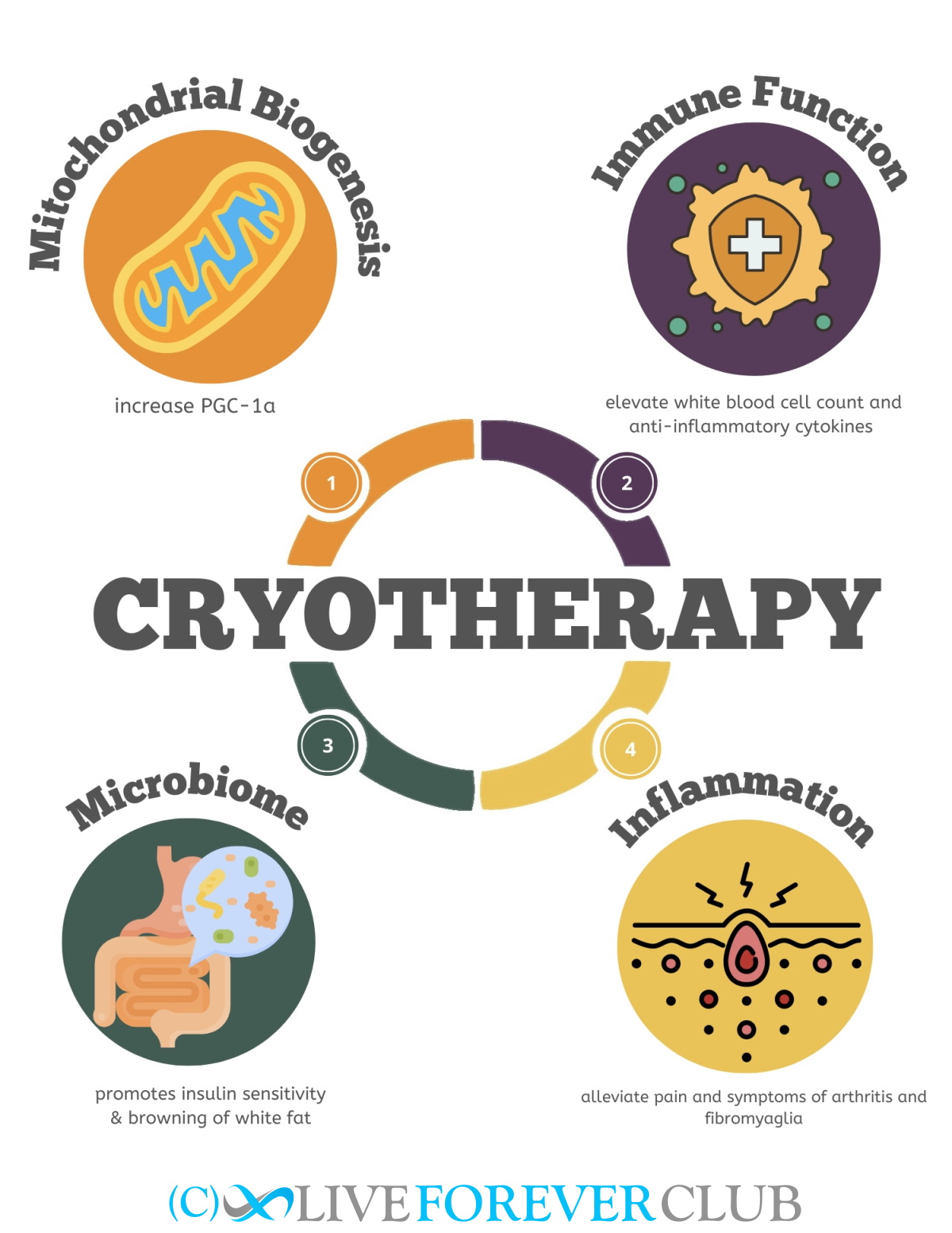 Mitochondria adapt to the cell’s metabolic demands. When the demand is high there is mitochondrial biogenesis and fusion.   When the metabolic demand is lower or mitochondria are damaged there is more fission (splitting) and clearance (mitophagy)[7].  This is a dynamic balance. Endurance exercise and other stressogenic factors like temperature shock and fasting promote biogenesis; sedentary life and advanced age shift the balance to fission and mitophagy.

There is a plethora of studies on the impact of cold exposure on the immune system. However, this impact is multifaceted and the results of different studies are sometimes contradicting.

The duration of exposure may modulate the effects of cold exposure to the immune system. Chronic exposure to cold seems to boost some types of immune cells. After a few weeks of cold exposure CD25 lymphocytes and CD14 monocytes increased; but not leukocytes or neutrophils[12]. Another study found that winter swimmers had higher concentrations of leukocytes, monocytes and IL6 compared to nonhabitual swimmers[13]. Even short-term exposure, just two hours, increased the levels of cytotoxic T lymphocytes, natural killer cells and IL-6[14].

Athletes with medium-term exposure to WBC (daily for three days), saw their IL-8 and IL 18 levels increase. Interestingly, the response was different depending on the type of sport: runners and cyclists did not have the same response. The type of training may affect the results of the studies – these may also be because the effects of cold exposure are tightly linked to norepinephrine, which is also increased during exercise[15].

Immune cells express adrenergic receptors, that respond to norepinephrine[16]. However, adrenergic signalling mediated by norepinephrine is immunosuppressive. For example, norepinephrine promotes the release of IL-10 which is a suppressing cytokine. This might be costly in cases of acute infection[17,18].

The immunosuppressive properties of norepinephrine, although maybe damaging during acute infection, are beneficial in cases of chronic inflammation. Chronic, unresolved inflammation is damaging and related to ageing and ageing-related diseases. Research suggests that cold exposure decreases inflammation. Many studies have found that cold exposure promotes the secretion of the anti-inflammatory cytokine IL-10[19]. At the same time, it decreases pro-inflammatory cytokines like IL-1β, IL-2 and prostaglandins[20].

Important results come from the study of arthritis, an inflammatory joint disorder. Cold exposure seems to alleviate from pain and symptoms of the disease. Both localized, as well as WBC, decreased pain in a randomized clinical trial[21]. In a different study, WBC had similar benefits to a traditional rehabilitation program in terms of pain and disease activity improvement. The pro-inflammatory cytokines IL-6 and TNF-α decreased in both groups[22].

One more group of patients who potentially to benefit from cold exposure are fibromyalgia patients. WBC for 15 sessions led to important clinical improvement in quality of life, pain, fatigue and other parameters[23]. The pain alleviation properties are most probably linked to norepinephrine, which is known to alleviate pain when injected into humans and animals[24].

Lastly, cryotherapy is popular for athletic inflammation, producing a similar anti-inflammatory profile and even decreasing the markers of muscle damage in different studies[25,26.]  Nevertheless, it is still not clear if and how these anti-inflammatory qualities of cold exposure are related to athletic performance; with the timing of the cryotherapy about exercise probably being a factor[27].

The microbiome responds to changes in temperature to assist in thermogenesis. Upon cold exposure, the microbiome adopts richer composition. It also promotes insulin sensitivity and browning of the white fat, which may help with weight loss[28,29].

The gut microbiome produces metabolites that mediate host thermogenesis. Depletion of the microbiome, with antibiotics, for example, reduces thermogenesis from brown adipose tissue and browning of white tissue[30]. However, according to another recent study, the cold exposure shifts the microbiome to more pathogenic populations that are related to cold-induced hypertension[31].

We need to keep in mind that FDA has not cleared or approved any whole body cryotherapy device to treat any medical condition and WBC should not be used instead of other treatments[32]. Furthermore, cold exposure, especially the total body, is not free of safety risks, especially when unsupervised.  The most common risk is hypothermia, or reduced body temperature below 35°C (95°F ). Afterdrop (later decrease in core body temperature) and frostbite (skin freezing) can also occur. This latter is why in WBC participants protect their extremities with gloves and masks and should never undertake the therapy unaccompanied.

As whole body cryotherapy seems to combat some of the underlying causes of ageing (mitochondrial health, immune system, inflammaging) with few risks, it is a good candidate for extending your healthspan and potentially reducing your biological age. It’s not a life-extension treatment in its own right but could be part of a mix of good lifestyle practices that keeps you healthy until more fundamental therapies arrive.

Thinking of trying whole body cryotherapy? Check out my experience of WBC at CryoLabs. 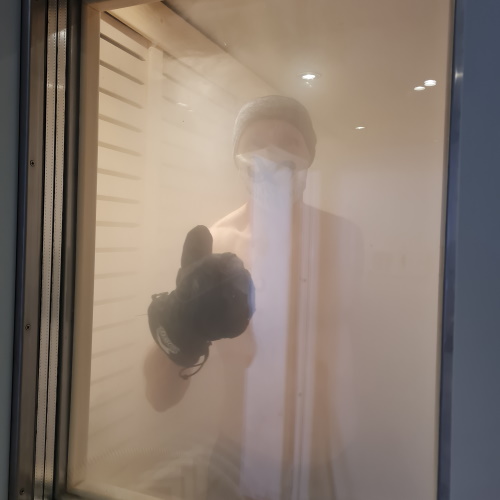 What’s it like to experience temperatures colder than the arctic?