There are several biomarkers currently being used that don’t influence survival greatly and are related to older individuals, these could be easily called “chronological age biomarkers”. Reduction of the coronal pulp cavity (using radiography) is a very common method used in forensic science, however, in adults most signs of aging like wrinkles and silver hair are features that can manifest at different points in someone’s life and won’t be useful to accurately determine someone’s biological age.

When looking for aging biomarkers that will reveal the biological age of an individual, these can be split between functional (macro) and physiological (micro) biomarkers. 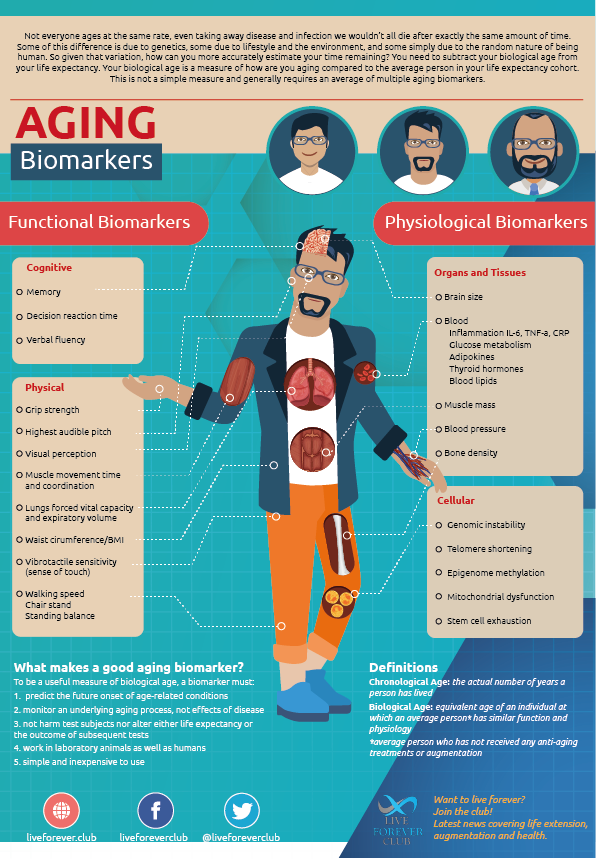 After many decades of research, the scientific community now agrees on 9 hallmarks of aging that relate to physiological processes acting at the cellular level. These are: accumulation of genetic errors due to genomic instability, telomere attrition or degradation, epigenetic alterations, damage of the internal mechanism in charge of quality control for protein synthesis, deregulated nutrient sensing, mitochondrial dysfunction, loss of the capacity to grow and change stem cell exhaustion and altered intercellular communication.

All of the physiological biomarkers considered above provide data about the capacity of the organism to sustain operation of its own processes over time and also about its capacity to withstand different forms of stress.

These nine hallmarks of aging are robust candidates to be considered for any system dedicated to the determination of biological age; however, obtaining accurate measurements of any of them requires a lot of specialized equipment and capable staff, since they cannot be evaluated easily. Some of them like stem cell exhaustion or mitochondrial dysfunction can only be measured by taking a biopsy and performing a longitudinal study in vitro under laboratory conditions, something that most laboratories don’t provide as part of their usual services.

Functional age is a specialized form of biological age, is task-oriented, and can provide valuable information in regards to an individual’s capacity to perform a particular task or its vulnerability within a certain set of conditions.

All biomarkers mentioned in this article have shown correlation with the process of aging in the past, however, a system designed to provide an accurate value for someone´s biological age will have to integrate a large number of these variables at the same time and incorporate an elegant method to accumulate, process and interpret data from a considerable amount of sources.

GlycanAge Biological Age Test Review
25-Feb-2021 What can your glycome tell you about your true age?

Ambrosia Plasma relaunches - announces improvement in key ageing biomarkers
03-Feb-2020 The Club interviews Jesse Karmazin, CEO, to find out more about the trial, the FDA warning, and the relaunch