As part of my research for the Live Forever Manual I thought drinking plenty of water would be an obvious tip, but the evidence wasn’t clear enough that it extended life. So it hasn't made it as a practical tip in the book, though there are plenty of benefits from keeping well (but not overly) hydrated.

The 8 glasses of water per day rule came from a 1945 recommendation stating that a suitable water allowance for adults is 2.5l/day in most instances. However internet, sports and nutrition media tend to present these quantities as plain water ignoring the fact that most of those fluids are regularly consumed in everyday meals and drinks. One of the probable reasons for hydration becoming a popular issue presented by media and regulatory bodies was the increase in the consumption of caloric beverages, which has contributed to obesity prevalence worldwide. This isn’t an issue in the UK, as one epidemiological study found that total fluid intake was mostly comprised of hot beverages, followed by water. 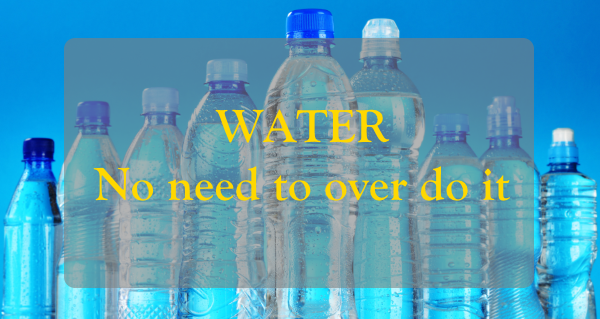 Water certainly is an essential component of our diet in so many ways. Firstly, it controls body temperature through fluid loss (sweating). The second essential feature is regulation of kidney function as kidneys use water to filter waste from the bloodstream and excrete them via urine.

Some smaller-scale studies also found that bad hydration may be linked with adverse cardiovascular health as it is involved in regulation of blood volume which is closely associated with blood pressure and heart rate. Blood volume is tightly regulated by the water intake/output ratio, which means that loss of body water will also decrease the blood volume, that way affecting other elements of the cardiovascular cascade.

Although gastrointestinal health is largely affected by bad dietary habits, it is also seen that inadequate water intake is a common culprit in constipation problems. Enhanced water intake is recommended in those problems as it can enhance gastrointestinal transit, however, evidence suggests that people respond differently. That is because some people are in hypo-, hyper and euhydrated state. The only usefulness of this treatment is seen in individuals that are in hypohydrated state not in those that are well hydrated.

Large observational studies found that water deprivation may affect cognitive performance, impair concentration, increase irritability and prolong migraines. The mechanisms underlying the associations between water intake and cognitive performance are not well studied, but there are indicators that mild dehydration may physiologically stress the body and compete with cognitive processes. it has been proposed that mild dehydration acts as a physiological stressor which competes with and draws attention from cognitive processes.

Skin health and moisture is often linked with proper water consumption, and this was confirmed in clinical trials in which 2L of mineral water/day had an impact on these features. Again, the significant results were obtained in the group that was already less hydrated and not in people that were euhydrated.

It is noteworthy to mention that water requirements vary greatly depending on the climate zone (people living in hot climates have higher requirements than those living in colder temperatures), while there is also a big difference between sedentary people and those performing some physical activity. People who have regular exercise in hot conditions and no adequate fluid replacement are at higher risk of hyperthermia, reduced stroke volume and cardiac output, while they also tend to experience decreases in blood pressure and reduced blood flow to muscle.

Yes, reasons for good hydration are plenty, however, a lamp of evidence reports conflicting results, that way suggesting that recommendations and alarms from the media are overreacting. Large population-based studies do not support the notion that we should drink 2 or more litres of water per day. As a matter of fact, one of them concluded quite the opposite – women that drunk higher amounts of water had a lower survival rate than those drinking less. One population-based cohort also failed to confirm that high water intake may lower the risk of kidney dysfunction and cardiovascular diseases in older adults (average age of 70.3), nor in men aged 55-75. But in another large-scale study they found a significant negative association between water intake and the risk of fatal coronary heart disease (which was more pronounced in men), while women with higher intake of fluids other than water were more likely to become ill.

So, according to the science we should definitely pay attention to our hydration status, however, bear in mind that you consume fluids through your regular diet too.

Too much of a good thing? More than a glass of milk increases chance of death
20-Nov-2014