I found some UK statistics from the UK government’s Office for National Statistics recently – they were prepared for the Department of Work and Pensions to determine how much the government needs to put by in pensions. (If you want to skip the statistics and just want to know when you might live forever, feel free to jump to the last paragraph now!) These statistics are particularly interesting as they look at life expectancy when a person is already aged 65 – so they avoid the big impacts on life expectancy “at birth” statistics from the 20th century including better child birth care, antibiotics and the world wars. 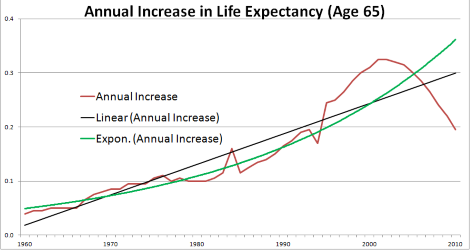 Using a standard linear trend line (in black) you can see a steady increase. Now what happens when the black line reaches 1.0? At that point people about to retire will start having their life expectancy increase by one year for every year they live*. So when will that be? Continuing the trend line shows indefinite life extension being reached in 2136.

But what about all the talk about exponential growth in medical technology? Oh yes! Don’t think I’d forgotten about that. Look at the green curve – this is a best fit exponential curve for the same data. Even with the recent trail off it still shows exponential growth. So when does this line reach 1.0? Much sooner – using the formula for the trend line Excel chucked back at me, this curve hits jackpot in 2036, a whole century sooner. So if you’re currently under 44 (in 2015) you’ll reach 65 just as life expectancy is increasing as fast as you’re living – welcome to immortality!

*OK in a year’s time you’re now 66 so not quite at the same point on the graph, but a couple of years later life expectancy will be increasing faster that time passes so this seems as good a point as any to say on average people will be living forever.

The UK's largest independent producer of official statistics and the recognised national statistical institute of the UK. 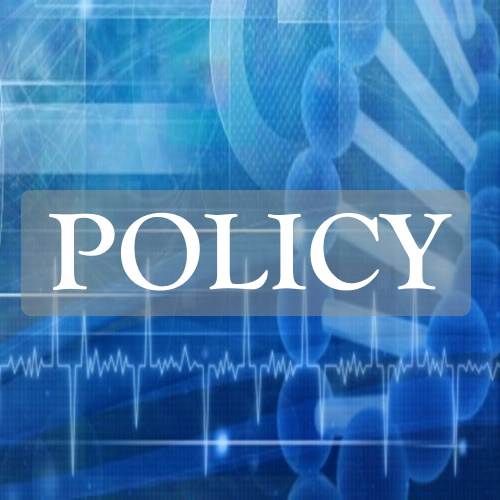 What to do when quality-adjusted life years could mean many, many years?

National Geographic get it wrong - this baby will live forever