The UK's Chief Medical Officers (CMO) suggests lowering the consumption of alcohol to not more than 14 units per week, regardless of gender, and more troubling has stated that there is no safe level at all for drinking alcohol. According to the Department of Health, three independent groups of experts have met in the last 2 years to consider various evidence on the effects of alcohol on different aspects of health such as accidents, cancer, injuries, and life expectancy. 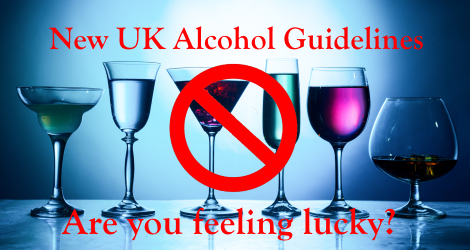 The previous guidelines were published in over 20 years ago so it’s no surprise that research as improved since then and it has demonstrated growing evidence of alcohol-related diseases and mortality. Earlier studies may have been skewed with non-drinkers including former alcoholics and people in poor health – which then made that cohort worse off, on average, than moderate drinkers.

Every drink increases your risk of death or developing a range of illnesses such as cancer of the mouth, throat and breast. However the government has given a suggested limit where your chance of dying from your drinking is 1%. That risk of dying early is roughly the same as driving in a car – but getting around is an essential part of life – you could choose to be teetotal.

One area that I’ll look into in more detail in another blog post is whether there is a play off between drinking and mental health – does being more social counteract the downsides of alcohol? Unfortunately I think the new guidelines are based on overall mortality so that’s already been taken into account.

Another thing to remember, and something I really have to get my head round one day, is that mortality rate isn’t proportional to life expectancy. So drinking 14 units a week would increase your mortality by 1% - that doesn’t mean you’ll die 1% sooner (say 9 months on average) but more likely only a month or two earlier. And what’s the chances of the cure for aging, or whichever disease is killing you at the time, being discovered in that window? The answer is “small” – but if you try to reduce your risks from lots of different angles (alcohol, diet, exercise, etc) then that window gets bigger and bigger and may just save your life.

It’s a game of chance – so are you feeling lucky?

How much is a unit of alcohol?

Half a pint of beer (4% strength – so even less for stronger lagers)
Half a glass of 11.5% wine (based on 175ml glasses – though this typically varies between 125-250ml)
1 shot of spirits (e.g. vodka, whiskey)
Still want to drink?
If you’ve decided you’re going to take the 1% gamble the revised guidelines also suggest the following:
No binge drinking - it is better to spread out your consumption
Some days should be alcohol-free
Do not drink alcohol when you are pregnant or planning a pregnancy

What about red wine?

For years, red wine has been touted as the cure for aging due a substance called resveratrol. Resveratrol has been shown to act as a sort of magic health pill due to its benefits particularly on protecting your cells from free radical damage, various cancers, and maintaining cardiovascular health.

Recent studies suggest resveratrol does not add years to life but rather adds life to years – so if you’re going to drink then it seems sensible to use up your units with red wine and enjoy some benefits in return.