Tom's original title is "I promise this story about microwaves is interesting" - and it definitely is!

While working on one of the new military-grade radars he realised that the peanut bar in his back pocket had melted.

A massive radar dish is basically the same technology as this microwave.

NOTE: there is a high-voltage capacitor in microwave ovens - DON'T TAKE APART!

The microwave generator is called a magnetron.

Put a magnetron, tuned the wavelengths so that water absorbs the radiation easily, inside a Faraday cage, and you can cook lunch.

The technical term is "diathermic heating".

In 1947, that engineer's company (Raytheon) released the first commercial microwave that was the size of a fridge.

The first domestic microwave was released in the late 1960s once magnetron technology had improved.

I found papers from the 1950s talking about the reanimation of frozen rats and hamsters at the National Institute for Medical Research, a government laboratory in Mill Hill, London/

Scientists at that lab froze rats and hamsters beyond the point of death.

No heart rate, no breathing, core temperature around 1°C, somewhere between 10 and 50% of the animal's body water frozen to ice.

They used ice and a bath of propylene glycol and then applyied hot spatulas to the chest.

The success rate wasn't great and the animals were often left with burns.

In 1955, one of the researchers has the idea to use a magnetron - that was James Lovelock.

At 101 years old he goes for a walk along the coast every day.

For 10 shillings of my own money I bought a surplus RAF transmitter.

I've joined this up with a waveguide, into a metal box made out of wire mesh.

He shares some fun stories from that time:

More importantly, it worked with the hamsters.

With a precise calibrated microwave and artificial respiration (to start pumping oxygen around the body) almost every rodent they froze was successfully reanimated.

"You cannot freeze a human. It's partly a matter of how quickly you can get the anti-freeze agent to diffuse into the cells."

James Lovelock may not have invented THE first microwave but he certainly invented A microwave.

And he thinks a human is too big to freeze.

Mentioned in this Resource

Originator of Gaia theory and inventor of the electron capture detector

Novacene: The Coming Age of Hyperintelligence 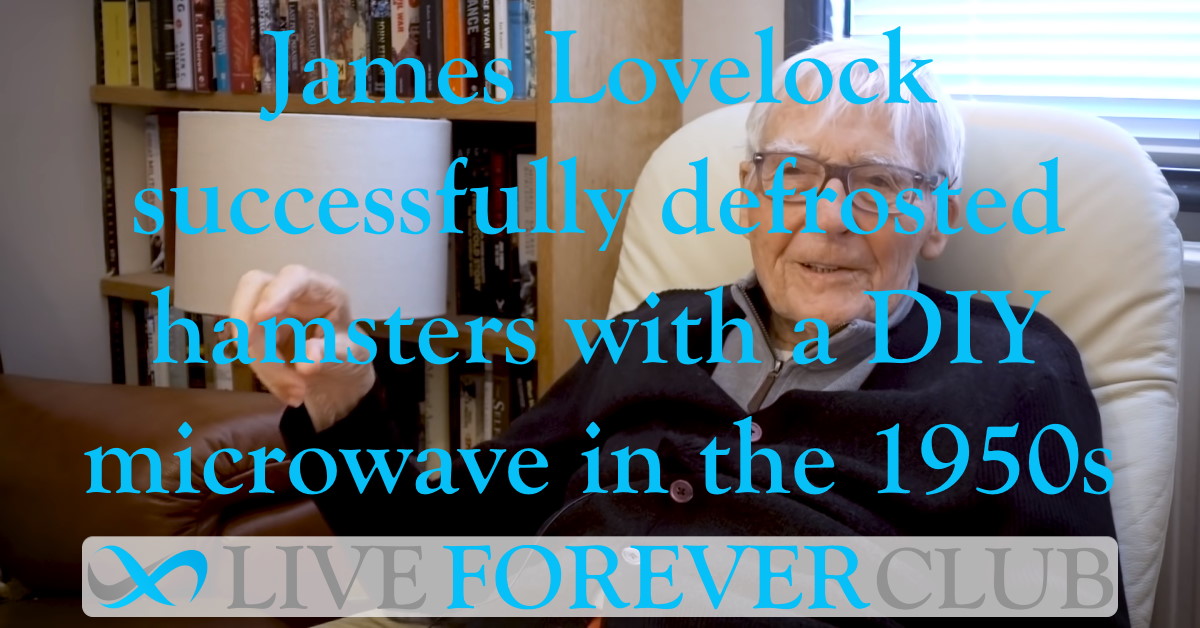